Thurl Arthur Ravenscroft was an American voice actor and singer, who was best known for as the original voice of Tony the Tiger in the Kellogg's Frosted Flakes commercials for more than five decades.

Ravenscroft was born in Norfolk, Nebraska on February 6, 1914. He served as a navigator in the WWII Air Transport Command before settling in Hollywood.

An accomplished singer, Ravenscroft performed with The Sportsmen, The Mellomen, The Johnny Mann Singers, and many major stars, including Jim Nabors and Elvis Presley. He is best known, however, for his booming bass voice and mellifluous voice-overs, particularly as the voice of Tony the Tiger in both English and Spanish commercials for Kellogg's Frosted Flakes cereal from 1953 to 2004. He also sang "You're a Mean One, Mr. Grinch" in the 1966 Chuck Jones holiday special, How the Grinch Stole Christmas. In 1996, he and his wife, June retired in Southern California, although he still did occasional voice-over work as Tony the Tiger until his death.

His voice can be heard in several Disney theme park attractions, including The Haunted Mansion (as the lead singing bust), Walt Disney's Enchanted Tiki Room (as Fritz, Tangaroa and some of the Tiki Masks), Country Bear Jamboree (as Buff), Pirates of the Caribbean (as several singing pirates), and as a former narrator on the Disneyland Railroad. He also voiced the herald declaring Sleeping Beauty Castle open during Disneyland's opening day.

In 1995, Ravenscroft was honored as a Disney Legend.

Ravenscroft died in his home in Fullerton, California on May 22, 2005.

His song "You're a Mean One, Mr. Grinch" was featured in Hawkeye.

One of the Card Painters
(Alice in Wonderland)

Al the Alligator
(Lady and the Tramp)

Captain
(One Hundred and One Dalmatians)

Sir Bart
(The Sword in the Stone) 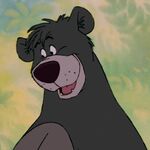 The Potter
(The Small One)