Mark "Thurop" Van Orman is an American TV writer, director, cartoonist, producer, animator, storyboard artist, storyboard director, singer, and voice actor. He is known for being the creator of the animated series The Marvelous Misadventures of Flapjack, in which he voices the titular character. He studied character animation at the California Institute of the Arts.

For Disney, he voices Li'l Gideon in Gravity Falls. 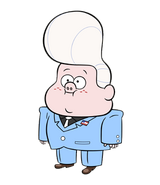 Li'l Gideon
(Gravity Falls)
Add a photo to this gallery
Retrieved from "https://disney.fandom.com/wiki/Thurop_Van_Orman?oldid=3876973"
Community content is available under CC-BY-SA unless otherwise noted.