Thurston is a character that appears in The Lion Guard. He resides in the Pride Lands.

Thurston is a proud, and dim-witted zebra. He is easily spooked and will run at even the slightest hint of danger. Even simple concepts such as thunder confuse him, and it often takes extra explanation for him to understand a situation.

"Never Judge a Hyena by its Spots"

Thurston overheard the Lion Guard saying that they need directions. Bunga asked if he knows how to get to Flat Ridge Rock. He says that he doesn't know and goes back to his herd.

When Rafiki says that Bunga is the wisest animal Thurston believes him. Timon and Pumbaa explain that Bunga is giving advice. However when the flood starts the zebras run with the Lion Guard saving them.

"Eye of the Beholder"

Janja's Clan goes after the zebras after trapping the Lion Guard. Ono helps them out.

Thurston is seen talking to Beshte and is worried about the hyenas attacking. When he heard that Mtoto is in danger he says not to listen to the kids since they are trouble makers. Gumba has said that it's the truth.

Janja's clan is once again attacking the zebras.

Thurston meets Ajabu and wonders what kind of animal he is. Soon Makucha comes and says that he's after someone taster.

Thurston gets stuck in the mud.

Thurston is seen running from genets.

"The Rise of Scar"

Thurston is waiting for Ma Tembo to find the new water source.

After a fire started Thurston's herd starts to panic and run. The Lion Guard helps calm them down.

"Rescue in the Outlands"

Thurston is drinking water until a herd of buffalo comes in. Kion takes the zebras to a new watering hole. Soon Madoa comes saying that Jasiri is in trouble. Thurston comes to the Outlands to help the Lion Guard.

"The Bite of Kenge"

Thurston is seen being scared by Kenge.

Thurston helps out in the Christmas performance.

Thurston talks to the Lion Guard about stopping the dust devil. Thurston starts to believe that he's the Zebra Mastermind. Cheezi and Chungu believe him and decide to take him to the Outlands. While in the Outlands they talk about the Lion Guard's weaknesses. He explains that if you put flowers against their noses, it will make them sneeze a lot. Cheezi and Chungu decide not to bring him to Janja, and instead leave with the intention of putting his 'advice' to good use to make Janja and Scar even more proud of them.

Soon Goigoi notices Thurston in the Outlands. Goigoi talks about the Guard's weakness too. Thurston says, that the guard can't see him because of his stripes. Soon Tamka and Nduli decide to hunt for some food. They find Thurston sleeping in the Outlands. They try and sneak up on him but he wakes up. Thurston says that, if you rub the lion guard's tummies, they'll fall asleep. Tamka and Ndili go to try it. Later Cheezi, Chungu, Goigoi, Tamka, and Nduli all come back and are mad because they got defeated by the Lion Guard. The villains fight over which part of Thurston they wanted to eat. However, the Lion Guard came to save Thurston and they all walk home back to the Pridelands.

Thurston becomes friends with Tiifu while being underground.

Thurston gets scared by Shujaa.

"The Fall of Mizimu Grove"

Thurston watches Timon and Pumbaa's song until Scar's Army ruins the fun. Thurston soon gets scared by Scar when he shows himself to the Pride Landers.

"Battle for the Pride Lands"

Thurston says goodbye to Lion Guard as they make their way to the Tree of Life and agrees to protect the Pride Lands while they're away.

"Return to the Pride Lands"

Thurston watches Kion's coronation and is seen talking to Pinguino.

Kion has saved Thurston's life on a number of occasions from many things such as hyenas, wildfires, and floods. Thurston at one time came with him and the rest of the Lion Guard, and Madoa to the Outlands to save Jasiri and the cubs rom Janja's Clan. The zebra helped by distracting Cheezi and Chungu. Kion is also the first animal to ever call him by his name.

Bunga and Thurston are good friends. Bunga has saved the zebras from many different things. in "Bunga the Wise" Thurston thought that Bunga was smart since he stopped the lake from flooding. He liked getting advice from him.

OnFuli is sometimes annoyed by Thurston's stupidity as shown when he kept going the wrong way in the Outlands, or when he got scared of Madoa when she showed up in the Pride Lands for help, and when he believed he was part of the Lion Guard.

Beshte and Thurston are good friends. Beshte has saved Thurston's life on a number of occasions. The hippo has saved the zebra from hyenas, dry mud, falling from a waterfall, and from a wildfire.

Ono and Thurston are good friends. When Ono tries to warn Thurston and his herd that Janja's Clan was coming but Thurston, however, is more concerned with eating than listening to him. So Ono finally resorts to diving at the zebras, frightening them into panic and run to save them and get them out of the way so Kion can use the Roar of the Elders.

After she mistakenly startles Thurston and his herd, Kinyonga has shown a great desire to be friends with him, using her camouflage to hide herself to avoid startling the zebra, praising him considerably. She is visibly upset when her identity is revealed and Thurston soon enters a panicked state.

When Thurston finds out that he's in a dark cave he starts to panic and run. Tiifu sees him and goes back to calm him down. Tiifu explains that there's nothing scary in the dark. The two start to become best friends and they walk out of the cave together.

Thurston and Ma Tembo are good allies. In "The Rise Of Scar" Thurston's herd followed Ma Tembo's herd to find the new water source for the Pride lands.

Thurston is good friends with the king. He and his herd attended his Kumbuka celebration. In "The Fall of Mizimu Grove" Thurston didn't like it when Simba didn't tell the herds that Scar was back. They were thinking about leaving the Pride Lands but decided to stay.

Though they don't interact much, Shingo does scoff at him for stating zebras are the most delicious animals in the Pride Lands, when Beshte is assuring him and the other Pride Land animals.

Thurston is good friends with Timon and Pumbaa. He performs in "The Twelve Ways of Christmas" song.

Thurston, Kiara and Zuri are on good terms. While lost underground, the girls question the zebra and wonder how he got lost. They also helped him get back to the Pride Lands.

Thurston and Azaad are on good terms. Azaad helps Thurston get out of a hole.

Thurston and Pinguino are on good terms. Pinguino converses with Thurston at Kion's coronation and wedding.

When Madoa came into the Pridelands to ask for the Lion Guard's help. Thurston wanted to panic and run because she was a hyena. Kion explained that she was a friend of thiers. When they went to rescue Jasiri and the two pups Thurston came along so he can keep Files away.

After spotting his target Ajabu with Thurston's herd, Makucha is about to start chasing Ajabu again until he trips over Thurston, who begs for him not to eat him. However, Makucha completely ignores what could be considered a free meal, firmly believing that okapis are much tastier than zebras. Although Makucha appears to be mildly annoyed by his presence, Thurston is only a mild enemy to the leopard. And feeling insulted that there is something tastier than him.

Thurston hates Janja since he tries to eat him when he panic and runs.

Thurston hates Scar since he is friends with Simba. He knows that he is bad. After seeing Scar he starts to panic and run which causes all the other Pride Lands to do the same.

When Goigoi first attempted to eat him, the zebra greets him with pleasantry and tells the jackal that he can be invisible through stripes. However, when his plan is thwarted, he gets so angry at the zebra that he along with Chungu, Cheezi, Tamka, and Nduli attempt to eat him until the the Lion Guard ave him from them.

Tamka and Nduli has a great deal of resentment towards the zebra, mainly because he gave him false information on the Guard's weaknesses.

Kenge attacks some animals at the Watering Hole and Thurston is there. He and his herd are panicking and running.

"Those stripes don't suit ya, I'd change 'em to spots!"

Thurston, however, is more concerned with eating

Stuck in the mud

Thurston talks to the Guard

Thurston does not know where Flat Ridge Rock is

Explaining what scared him

Laughing at the joke

Thurston approaches the Lion Guard, seeking a new watering hole for his herd

"That's how I earned the strips on my backside...

"There's plenty of room back there for another one."

Thurston celebrates his chance to return to the Pride Lands

Thurston speaks with Cheezi and Chungu. 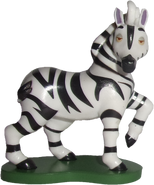 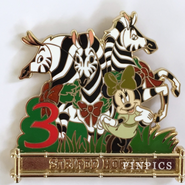