William Stewart (2008-2013)
Tiffany Sara Cornilia Haddish is an American actress, comedian, and author. She is best known for her role as Nekeisha Williams in the NBC sitcom The Carmichael Show from 2015 to 2017, along with her roles in the films: Girls Trip, Night School, Nobody's Fool, and Like a Boss. She also voiced Queen Watevra Wa'Nabi in The LEGO Movie 2: The Second Part, Daisy in The Secret Life of Pets 2, Debbie in The Angry Birds Movie 2, Tiffany Haddock/Master of Ceremonies in The SpongeBob Movie: Sponge on the Run, and Tuca in the Netflix/Adult Swim animated sitcom Tuca & Bertie.

For Disney, she played a tour guide named Charlotte in the That's So Raven episode "When in Dome". She also voiced "The Sound Someone Makes When They Explode From The Waist Up" in Phineas and Ferb the Movie: Candace Against the Universe. She will guest star in The Proud Family: Louder and Prouder and portray Harriet in The Haunted Mansion. She is currently the host of the 2019 revival of Kids Say the Darndest Things, which aired on ABC before it was cancelled in 2020 after one season. However, the series moved to CBS and premiered on May 5, 2021 with Haddish returning as the host. 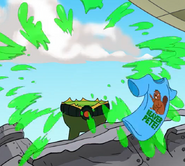 The Sound Someone Makes When They Explode From The Waist Up
(Phineas and Ferb the Movie: Candace Against the Universe)
Community content is available under CC-BY-SA unless otherwise noted.
Advertisement