This is the first (and to date only) film in which both Panettiere siblings appear, although both were involved with Racing Stripes (Hayden was the human star and Jansen's voice was used for the young zebra, Stripes, at the beginning of the film).

Tiger Cruise is one of only two DCOMs to receive a TV-PG rating and a "Viewer discretion" warning due to intense and/or disturbing scenes and/or images; the other is Wendy Wu: Homecoming Warrior. It is also another DCOM to be "inspired by true events".

Maddie Dolan, an artistic teenager from San Diego, is on a mission to convince her father Gary Dolan, a U.S. Navy Commander (O-5) and executive officer of the USS Constellation (CV-64), to throw aside his career and come home, where she believes he belongs. In order to accomplish this, Maddie accepts her father's offer to participate in Operation Tiger, a week-long cruise for military families and their friends aboard his aircraft carrier. Along the way, she meets two other teenagers boarding the Tiger Cruise: Tina, who's fascinated by military life, as well as her older sister, Grace (a naval aviator under Commander Dolan), and Anthony (whose older brother is a sailor), a carefree drummer who much prefers to have nothing to do with military life.

On September 10, 2001, one day into the cruise, Maddie and Tina are excited about the airshow that is about to start in a few minutes. When Grace hears that they want to be at the deck taking pictures of her jet taking off, she refuses. Even though they say they will be out of the way, she still refuses, and lets them know they can watch the airshow only from Vulture's Row. Careless about the rules not to go to the deck, they, now go along with Anthony, ask Gary the same question, and yet, he too refuses. Anthony, however, leads them to the deck anyway. There, they are disguised as pilots and proceed to take the pictures of her sister's jet taking off and a few others. However, before Tina can take other pictures of the next jet taking off, the instructor spots them and has the guards chase them. The kids manage to hide in the stairs leading down. However when they emerge out of the stairs, thinking that they have evaded capture, two of the guards catch them and they are arrested for the crime. After the incident, they are taken to Captain Anderson's office. In the office he tells them that what they did was in direct violation of regulations not to go out on the deck during the airshow. He also tells them that if they had been sailors and broke that law, they would have been brought up on charges. He lets them go with a warning: if one of the children causes any more trouble, as they did earlier, they will be confined to their quarters for the remainder of the voyage.

After he talks to their families about the incident, Gary is disappointed with Maddie for disobeying the rules, and talks to her about another incident that had happened 7 weeks earlier. In that incident a crew-member was lost while trying to land a jet. The jet crashed on either the runway or in the ocean during a practice maneuver, he says, and everyone is serious about this. He tells her that going out on the deck is dangerous and also says that she will need to start thinking about her actions and not to make the same mistake ever again. At the same time, Kenny confronts Anthony about what happened and says it was a mistake for him to come onto the ship. Then, he tells him that, for the next few days he will have to behave himself and not get in any more trouble. Maddie, Anthony and Tina are overcome by emotion and apologize to each other and talk about how their parents reacted to what the kids did. Later that evening, Maddie apologizes to her father for what she, Anthony, and Tina did. Then, her father tells her he will come home after the voyage. On September 11, 2001, two days into the cruise, the passengers, to their horror, learn of the terrorist attacks on the World Trade Center and The Pentagon. The ship goes into high alert, with many of the passengers in fear and confusion, but also showing mental strength.

Tina finally learns the full meaning of her sister's warnings about military life not being as glamorous as she thought it was; Anthony realizes the gravity of the situation when he fears about the safety of the people he personally knew (he lives in New York City), who had jobs in the twin towers. Maddie, while comforting passengers young and old, experiences in first-hand of her father's honor, courage, and commitment to his family and his will to make sacrifices for his country and now, he will have to stay with the military, which upsets Maddie. The ending shows the passengers holding up a giant American flag on the deck of Tiger Cruise as a suggestion by Maddie, impressing her father and the military officers. By the end of the cruise, Maddie tells her father to "keep doing what he's doing" and has accepted being a military brat, a title which she had disliked earlier.

Tiger Cruise is a fictional story inspired by actual events aboard the USS Constellation (CV-64), as well as 9/11.

When the Constellation arrives in San Diego, California, downtown San Diego is featured in the background showing the Twin Hyatts where only the first one had been completed by September 2001, roughly around the time of the terrorist attacks on the World Trade Center and the Pentagon.

Much of the movie was shot on board USS John C. Stennis with additionally filming on board USS Nimitz (the Constellation was decommissioned before production started). The hull numbers of all three ships are visible at various times throughout the movie. Actual crew members of the Stennis were used as extras, and a few can be seen wearing Stennis ballcaps instead of the prop Constellation caps. On September 12, 2001, the full moon was shown. The actual phase of the moon was a waning crescent less than a week away from a new moon.

The shots in the beginning of the movie featuring Maddie's home were filmed at Orange Lake Country Club in Kissimmee, Florida. 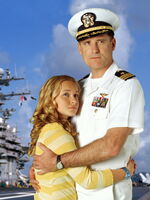 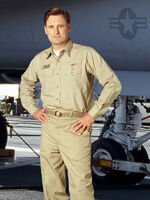