A. Resident
A. Guest.
Cousin Jilly
Till (by Nancy)

Barry Cuda, Spiders, People messing with her brother and her family, being on the naughty list during Christmas, people not being nice and kind things, Saxon being torn up/being messed up

Tilly Green is the deuteragonist of the Disney Channel animated series Big City Greens. She is the big sister of Cricket Green.

Tilly is a very unusual girl. She tends to have a very quiet demeanor, but hidden underneath is a creative, imaginative and sometimes surreal child. Tilly is very kind to those around her and much like her younger brother Cricket is willing to help those in need. While she seems to be unintelligent at times, she actually houses a very wise and open mind.

Tilly is shown to be somewhat controlling at times. In "Mama Bird", she insisted on being a trio of baby birds' mama despite Bill telling her not to interact with them and their fascination with Cricket rather than her. She also attempted to scare Cricket from doing dangerous stunts in "Cricketsitter" only to accidentally dislocate his arm and fretted about being punished by Bill. In response, she shows a very determined side to set things right.

Tilly is a very small 12-year-old girl and only slightly taller than Cricket. While she displays a yellow complexion like her family, she is noticeably more pale than the rest of them. She has short black hair and freckles underneath her eyes. Tilly also has buck teeth similar to Cricket and full cheeks. She dresses in a light violet dress with a white collar and wears white socks and olive-colored shoes. Since the episode "Tilly Style", Tilly has begun wearing earrings. However, she covers them with her hair because she is "wearing them for [herself]".

She bares a resemblance to her great-great-aunt Metrona Green.

Tilly adores her little brother Cricket. She looks out for him and tries to be a good older sister, though at times she is more of a follower with a few exceptions such as in "Cricketsitter". Due to their closeness, Tilly is very patient with her brother and will reach out to him in the most gentle way possible. She only wants what is best for him and comfort him. However, she has been shown to slightly envy some things Cricket does and is sometimes motivated to try and match his abilities such as in "Cricket's Shoes". Ultimately, she loves and cares for her brother.

Tilly has a considerable amount of love for her father Bill. She is more willing to listen to him than Cricket and cares for his well-being. Because of this, she can be more submissive to his authority especially when she is involved in shenanigans with Cricket.

Tilly cares about her grandmother Alice, but unlike Cricket and Bill, is much more patient with her. As a matter of fact, she probably likes spending more time with her than the others. In "Tilly Tour", she wanted to show her all of what she thought was interesting about Big City. Tilly apparently makes it her mission to subject Alice to the modern conveniences of the world in the hopes of making her happy as she is well aware of her cynical world view.

Tilly loves her mother Nancy. She feels that because she was away for a long time that she would be worried about not being anything like her and wanted to impress her. However, she eventually learns that Nancy loves her regardless. Tilly does not seem to mind her living in a mobile home as opposed to the Green house and considers herself close to her anyway.

Andromeda is Tilly's best friend. Much like how Cricket and Remy have contrasting personalities, so does Tilly and Andromeda. Tilly's friendship with her was mostly motivated with wanting to spend time with a girl that she could be friends and was willing to lie to her about her interests in conspiracy theories just to be close with her. When she revealed the truth, Andromeda was hurt, but began to accept her as her friend and ally. Since then, the two have been very close with one another.

Most of Tilly's interaction with Remy is through Cricket. She gets along well with him and seems to enjoy having him around. Much like Cricket, she pushes for him to be more rebellious and take initiative with his life.

Like with Remy, most of Tilly's interaction with Gloria is through Cricket. Tilly will fill in for Cricket on occasion and work with Gloria. They get along quite well and don't seem to mind each other's company. In "Cricket's Shoes", when Tilly accidentally becomes the new Employee of the Month, she helps Gloria regain her place by acting like Cricket and causing a mess at the café. In "Clubbed", Tilly and Andromeda join Gloria at her girls' night out.

Tilly battered up after being hit by the backyard tree. 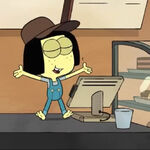 Tilly dressing up as Cricket