3
Tim Blake Nelson is an American actor, director, and writer. He is well-known for several roles, his most notable one as Casey Malick in the CBS drama series Chaos.

For Disney, he played Roger Johnson in the 1995 Disney comedy film, Heavyweights and Dr. Pendanski in the 2003 Disney comedy-drama film, Holes. He also portrayed Delmar O'Donnell in the 2000 Touchstone Pictures film, O Brother, Where Art Thou? and Samuel Sterns in the 2008 Marvel Studios film, The Incredible Hulk. 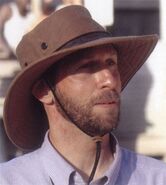 Dr. Pendanski
(Holes)
Add a photo to this gallery

Retrieved from "https://disney.fandom.com/wiki/Tim_Blake_Nelson?oldid=3805402"
Community content is available under CC-BY-SA unless otherwise noted.