1968-present
Timothy James "Tim" Curry is an English actor, voice actor, comedian, and singer who is best known for his work in a diverse range of theatre, film, and television productions, often portraying villainous characters. He is most famous for his portrayal of Dr. Frank-N-Furter in the 1975 horror comedy film The Rocky Horror Picture Show. He is also well-known for voicing Nigel Thornberry in Nickelodeon's The Wild Thornberrys, Hexxus in FernGully: The Last Rainforest, and Drake in the MGM animated film The Pebble and the Penguin.

The Evil Manta
(The Little Mermaid)

Forté
(Beauty and the Beast: The Enchanted Christmas) 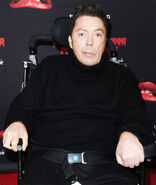 Tim Curry attending the premier of the The Rocky Horror Picture Show: Let's Do The Time Warp Again in October 2016.
Add a photo to this gallery

Retrieved from "https://disney.fandom.com/wiki/Tim_Curry?oldid=3899635"
Community content is available under CC-BY-SA unless otherwise noted.