The Time, "He", The Personification of Time

Imprecision, puns about his name, those who are uncompelled to be concise

Genius-level intelligence and wisdom, superhuman strength (implied as an automaton), ability to control himself as time, speeding up or halting a target, life imbuement and removal

“Time is a cruel master.
No, Time is a thief, and a villain.
”
―Alice and her mother describing Time[src]

“I used to think time was a thief. But you give before you take. Time is a gift. Every minute. Every second.”
―Alice to Time about her changed opinions about him.[src]

Time is the primary anti-hero in the 2016 Disney film Alice Through the Looking Glass, the sequel to the 2010 film.

Time himself, is, as per his namesake, the personification of the concept of time. He presides within his castle in The Void, carrying out his duties of monitoring the lifespans of Underland's residents. His body is described to be 'half human half clock', built very much like a clockwork automaton, and it shows within the Grand Clock mechanism on his chest and the contraption on his nape.

Initially, Time presents himself as an eternal and immortal figure, eager to display his majesty to his visitors - in front of other people, he is strict, only wanting concise answers and is demanding, especially of his minions, the Seconds. So demanding, in fact, that he can even come off as nonsensical in an Underlandian fashion. He often refers to the concept of time in regular conversation as himself, of course. Even if he treats the Seconds rather strictly, if he knows that he has been too stern, he cares deeply for his Seconds as if they were his children.

He desires to be treated with respect (albeit not getting it most of the time, with his general treatment from Iracebeth and Tarrant Hightopp's friends), often ticked off if he is made fun of for a prolonged time; if he is tricked in a way that is detrimental to his plans, say, Tarrant tricking him out of waiting for no-one through basic wordplay: "I didn't say she was coming, old bean, I said I had only invited her!", he is not above punishing those who have gone too far with an appropriate punishment, being halting them until Alice arrives.

Once he is in a relationship, however, he is eager to please the other party at even his own expense. To exemplify this is his list of services to his lover, Iracebeth: he built her a castle within a day, gave her an entire court of plant people, often gives her gifts and is ever willing to give anything else up, even Wilkins. His only boundary set for himself is the Chronosphere as his duty to protect his own lifeforce. He is also very gentle with the lives he has ended as well, treating them with respect and putting them away in a manner that is akin to tucking them in and putting them to sleep.

He even offers to fix anything that has been presented to him, for example Charles Kingsleigh's watch, not even thinking of the possibility that he may be gifted it. This implies that he is far too generous for his own good, only thinking for the good of others; this makes him a very fatherly figure much like the portrayal of Father Time.

Time is first seen when Alice enters his castle to retrieve the Chronosphere, or at the very least ask for permission to be lent it for how long she needs to save the Hightopps. Time is first seen extinguishing the life of Brilliam Hinkle, framing him as a villain, but quickly subverting it when he treats the dead soul with care. He catches Alice and introduces himself as the infinite, eternal, immortal and immeasurable (if without a clock) Time, and tells her that if she has something to say, she has to make it quick. He shows her the Grand Clock, he shows her his Seconds and his butler Wilkins, then brings her to the palace parlor to discuss what she needs. Alice tells him a long winded contextual story of the Hightopps' demise and the mortal danger her friend is in, but Time speeds it up only to halt it at the mention of the Chronosphere - he denies the use of it, and wills her to leave.

He prepares for a date with his esteemed liebchen, Iracebeth, and presents her a gift upon her arrival - she chucks it away and mopes about her desire for the Chronosphere, to which Time tries to comfort, while Alice swipes the Chronosphere, right behind his back. It injures him, prompting him to run to Alice's location and dispatch the Minutes. As Alice leaves and escapes from the Minutes, he is slapped by Iracebeth, then goes to build the Tempus Fugit, a handcar-esque time travel device that makes him catch up to her. He confronts Alice and knocks her into Toomalie Day, subsequently being swept into near the same timeframe, right into Tarrant's tea party.

During the tea party, he is under the belief that Alice is arriving when she was only invited, and is treated to puns about his name en masse by Tarrant, Mallymkun, and Thackery, then Chessur. Once he realizes their diversion, he locks the triad a minute before tea-time before leaving. This is not the pause that was shown in the previous film, as that specific pause was due to Tarrant attempting to kill Time just after Horunvendush Day; this pause was resolved by younger 9-year old Alice.

Later when Alice outside studies Tarrant's father, she then remembers Time in the Underlandians Deceased section where it is then known that the names of the Hightopp family are not displayed there but rather missing. Time then confronts Alice at the clock shop in Fell Day, commanding Alice to give her back the Chronosphere to keep the Grand Clock active, warning her that the Grand Clock must not stop as Alice cannot escape from him. Alice then tells Time that she will use the Chronosphere one last time to travel to the past Horunvendush Day event, but Time warns her that she will alter the present if she brings the missing family from the past to the present. Time then attempts to catch her, but fails to do so in time as Alice escapes from him via mirror.

Later, Time then reports to his lover Iracebeth about the Hightopps under the impression that she knows where Alice is, and that he has not retrieved the Chronosphere back, which results in him being chained to a chair beside the dead Ilosovic Stayne, hair and eyepatch affixed to his skull, his skeleton in his armor and all. He is then sent back to his castle by the Underlandian animals and the Tweedles after they free themselves (plus Alice and Tarrant) from their cage, and is encrusted with rust just before Alice manages to get the Chronosphere on the pedestal in time. She does manage it, though.

At the end of the movie, he forgives Alice's actions and gratefully receives her gift of her father's watch, accepting her as a friend, only to tell her to never come back (hopefully only referring to his palace).

During the 2D animated scene in the credits showing the aftermath of the movie, Time is drinking tea with the Mad Hatter and the others. He tries to trick the Hatter but is then promptly out-tricked, showing that he has his own sense of humor. 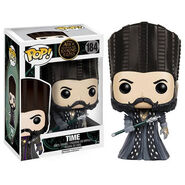 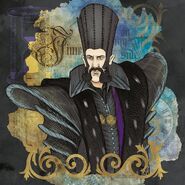