To travel through time
Timekeeper was the main character in the attraction of the same name.

Timekeeper is a eccentric scientist from M.I.T.T. (Metropolis Institute of Time Travel), who by inspiration from the works of Jules Verne and H.G. Wells, builds a time machine, presenting his invention at venues such as the Visionarium in Discoveryland and Metropolis Science Center in Tomorrowland.

With the help of his assistant, 9-Eye, Timekeeper was able to transport himself and the guests to different times in Earth's past, present, and future.

Timekeeper was designed specifically with Robin Williams in mind when the attraction was first developed for Disneyland Paris. However, French officials insisted on it featuring a French dub, resulting in Williams only being heard as Timekeeper when it was brought to the Magic Kingdom. Timekeeper's design would later be recycled for Tom Morrow at Disneyland's version of Innoventions.

In the library of the Jungle Navigation Co. Ltd. Skipper Canteen is a book titled, "Keeping Time" by Williams, referencing the character of the Timekeeper.

Timekeeper made a cameo in the show Stitch's Supersonic Celebration. Here, he alongside 9-Eye and Tom Morrow 2.0 were shown being sold off by RoboMart, a subsidiary of the evil corporation X-S Tech. 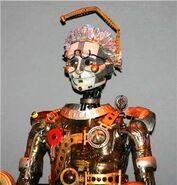