The game contains five mini-games that feature Timon, Pumbaa and the other jungle animals from The Lion King. The object in this game is to have fun while Timon and Pumbaa entertain the player with glimpses of jungle living, especially when certain mini-games require the player to consume insects.

The PC version featured a full voiceover, complete with humorous introductions to games. The SNES version lacks Bug Drop (as it was released as a stand-alone cart in the form of Kirby's Avalanche) and does not feature the voiceovers, but has some sound effects from the PC version intact, although in lower quality. 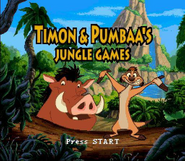