This article is about the House of Mouse episode. For the television series, see Timon & Pumbaa.

House of Mouse
"Timon and Pumbaa"

"Timon and Pumbaa" is the sixth episode of House of Mouse, originally aired on ABC on March 3, 2001.

Timon and Pumbaa are set to perform a show, but end their friendship after they decide that they can't make the same decisions, so Mickey decides to bring them back together. 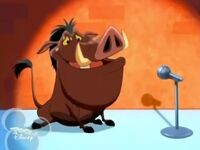 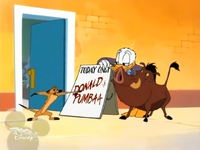 Retrieved from "https://disney.fandom.com/wiki/Timon_and_Pumbaa?oldid=4410252"
Community content is available under CC-BY-SA unless otherwise noted.