Alexander (with Oksana Grigorieva)
Timothy Peter Dalton is a Welsh film and television actor, who is best known for his role as the British secret agent James Bond in The Living Daylights (1987) and Licence to Kill (1989).

For Disney, he played Neville Sinclair in the 1991 Disney period superhero adventure film, The Rocketeer and voiced Mr. Pricklepants in the Disney/Pixar Toy Story franchise, Lord Milori in the 2012 Disney Fairies film, Secret of the Wings, and Demanitus in Tangled: The Series. He also voiced Ged in the English dub for the 2006 Studio Ghibli film, Tales from Earthsea.

Lord Milori
(Secret of the Wings) 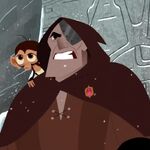 Timothy Dalton behind the scenes of Toy Story 3.

Timothy Dalton at premiere of Secret of the Wings in October 2012.

Timothy Dalton speaks at the Doom Patrol panel at the 2019 Winter TCA Tour.