Tinka was born in a small mountain country in Eastern Europe with her fraternal twin brother, Gunther. Her mother, Squitza Hessenheffer, was a princess in their country until her father her dethroned her for marrying a commoner, Kashlack. Tinka came to America with her family when she was a child. In "Add It Up", she revealed that they flew to Chicago on a business class flight. She and her twin brother were enrolled as exchange students since the 1st grade in elementary school, where she met CeCe Jones and Rocky Blue. She moved on with her brother and classmates to John Hughes High School. When she was 13-years-old in the 8th grade, she auditioned for the local teen dance show, Shake It Up, Chicago! and passed, becoming one of the newest teen background dancers.

Tinka is described as a flamboyant, fashionable, unique, weird, theatrical, and ambitious dancer on "Shake It Up, Chicago!." She is from a fictional country that has not been mentioned by name, but is often referred to by the twins as they differentiate American traditions from their own. Her taste in attire is loud and catchy and celebrates her love of performing. It is revealed in "Show It Up" that she and her brother have musical abilities as they performed two popular songs from their country. It is shown that she and Gunther both have sock puppets they make outfits for and call "Little Gunther" and "Little Tinka", first introduced in "Hot Mess It Up". She is known to insult CeCe and Rocky any chance she gets but can be nice when she wants to be. In "Shrink It Up", Gary Wilde calls them out for always being mean. They attempt to be nice and pick Deuce to try it out. In "Vatalihootsit It Up", Gunther and Tinka invite Rocky and CeCe to come to their home to celebrate Vatalihootsit Day, a holiday where you celebrate your enemies. There are many strange rituals they perform. Their parents turn out to be even more strange than Gunther and Tinka and they are revealed to be royalty; their mother was a princess until she was dethroned for marrying a commoner. Their parents tell Rocky and CeCe that they know Tinka and Gunther are not "well liked at school" and that their coming "meant the world" to the twins.

Gunther and Tinka are fraternal twins and best friends, who spend most of their time with each other. They are also dance partners on Shake It Up, Chicago. In "Add It Up", Tinka feels lonely, wanting a boy to like her after always seeing couples act affectionately towards each other. Gunther offers to take her out on a date, but Tinka states that she wants a "real date". Gunther looks shocked and horrified when Tinka points out that "it's not like we're going to grow up and get married!" The first time they are not seen together is in "Heat It Up". They often wear flashy matching clothes, and they are shown to have musical abilities, singing two songs (A Goat for Christmas and Your Uncle is a Werewolf) together for the school talent show in "Show It Up". It is revealed that they take care of their little cousin Klaus Hessenheffer in "Auction It Up" and "Judge It Up". In "Made in Japan" their closeness is formally revealed when Tinka is arrested and almost deported. Gunther is extremely upset over it and seems like he was having anxiety at the thought of being separated from his sister for even a couple of days. In Fire It Up Tinka is very upset because her brother went back to the old country.

Tinka is a frenemy (friends in Season 3) of CeCe's, fellow dancer on Shake It Up! Chicago, and schoolmate at JHHS. Tinka, along with Gunther, often argue with CeCe and Rocky backstage on Shake It Up, Chicago. Tinka takes every opportunity to make fun of or insult CeCe, such as mocking CeCe about her freezing on the Shake It Up, Chicago stage in "Start It Up", they can be civil and friendly towards each other, as seen in "Kick It Up", where CeCe invites Tinka to the movies. In "Break It Up", the two were seen sitting together and Tinka asked CeCe not to leave her alone with Deuce. They shared other friendly moments in "Auction It Up" and "Judge It Up" when Tinka gave money to CeCe (and Rocky) after the twins realized they were wrong. Even though these two rarely bond, let alone have a civil conversation with each other, they still maintain a decent 'frenemy' relationship. In Slumber It Up Cece insists on inviting Tinka. In Fire It Up Cece claims Tinka gained their friendship, meaning they are friends. Later,In the middle of season 3 they become Good Friends.

Tinka is Rocky's frenemy. They don't often get along and Tinka takes every opportunity to insult Rocky, but not as much as CeCe. They were friendly in the episode "Vatalihootsit It Up" when Rocky accepted her invitation to their home. Rocky approaches her and Gunther in "Show It Up" to suggest that they join as one team to beat Candy Cho in the talent show. In "Split It Up", Tinka seeks help from Rocky after the two of them were left out of being featured to dance on Good Morning Chicago. She tries to make her feel jealous about CeCe and Gunther dancing on the morning show together. In Slumber It Up, Tinka and Rocky fight a lot at first but then they make up and hug. In Fire It Up Rocky says Tinka gained their friendship, meaning they are friends.

Tinka and Ty went on a date in "Add It Up", where he described her as "a whackjob with good hair." Gunther paid a hesitant Ty $50 to ask Tinka out because she felt bad about never going on a date. They danced together and got to know each other during the date. By the end of it, Tinka admitted she enjoyed the date, and so did Ty, but that being a couple won't work because they're so different. They played ping pong against each other in "Camp It Up", where Ty was again hesitant to play against her, because she's a girl. Tinka demanded that he not go easy on her just because she's a girl. In Whodunit Up? Ty was happy when he thought Tinka left him the secret admirer note and upset when he found out she didn't. In Ty It Up, Tinka dances with Ty for her audition to get back on Shake It Up, Chicago!. Caroline Sunshine, who plays Tinka, has acknowledged this couple on her Twitter, saying that her favorite episode is when Ty and Tinka went on a date; she also hashtagged "tynka". It has been rumored on some websites that Tinka will date Ty in Season 3, but it is still unknown if it is truly confirmed.

Deuce and Tinka have only interacted with each other a few times in the series. Tinka told Deuce that he could use a little help with his hair ("Give It Up"), and they have a conversation with each other in "Three's a Crowd It Up" when he tries to sell her a Betwinkler X-96 Turbo he also said she looked good. In "Break It Up", Deuce said he'd kiss Tinka out of all the other girls on the trip during a game of Truth or Dare. Rocky admits to being disgusted, relieved, and offended that he chose her. When CeCe said she wanted to check on Rocky in the lake, Tinka told her "No. Don't leave me here with... Deuce." In Tunnel It Up, when Deuce took Tinka's picture he said she was beautiful, this could indicates that he thinks that she's a babe. In Spirit It Up Deuce got mad at his girl friend for being mean to Tinka.

Flynn and Tinka have only interacted a few times. She and Gunther babysit him for the first time in "Meatball It Up", where Flynn calls her "Tinkle". They then babysit him again in "Break It Up" where they play a few games while the rest of the group is at the hospital following Rocky's foot injury. Tinka made a "Little Flynn" sock puppet, much to his delight, but Gunther scared him away with the Lake Monster sock puppet and when he ran away she laughed. </p>

Dina and Tinka first interacted with each other in Slumber It Up They seemed to get along well and not fight nearly as much as Tinka fights with Rocky Blue and CeCe Jones. In Spirit It Up, Tinka and Dina became "best friends" and Dina almost gave up her boyfriend to maintain Tinka's friendship. The only reason Dina went back to Deuce was because Tinka found a boy of her own and Dina realized how it felt to be a third wheel. 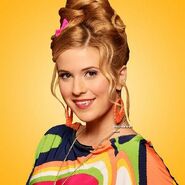 Add a photo to this gallery
Retrieved from "https://disney.fandom.com/wiki/Tinka_Hessenheffer?oldid=4246350"
Community content is available under CC-BY-SA unless otherwise noted.