Fun and talented animal fairy Fawn believes you can't judge a book by its cover, or an animal by its fangs, so she befriends a huge and mysterious creature of fairytale lore known as the NeverBeast.

While Tinker Bell and her best friends are not so sure about this scary addition to Pixie Hollow, the elite Scout Fairies set out to capture this mysterious creature before he destroys all of Pixie Hollow and its people. As an animal fairy, Fawn must trust her heart and take a leap of faith if she hopes to rally the five fairies' to save the NeverBeast and prove that there is so much more to this mythical creature than just razor-sharp fangs and claws.[1]

Fawn (Ginnifer Goodwin) runs into Tinker Bell (Mae Whitman) while taking Hannah, a baby hawk, to the forest. Fairies are not allowed to keep hawks as pets, for hawks eat fairies. So, Fawn uses blueberries to cover the cart and conceal Hannah. As Fawn and Tinker Bell pass by the animal nursery, they meet Rosetta (Megan Hilty), Iridessa (Raven-Symoné), Silvermist (Lucy Liu) and Vidia (Pamela Adlon) who question why they are taking berries to the forest, as berries usually come from the forest. Rosetta attempts to help by sprinkling pixie dust on the berries to make them fly, but Hannah is revealed. She chirps, frightening off all the animals and fairies in the area. Three other hawks hear her and start to chase the fairies and animals. Fortunately, the hawks are dispelled by Nyx (Rosario Dawson) and the scout fairies, who then capture Hannah. Queen Clarion (Anjelica Huston) shows up and advises Fawn to listen with her head as well as her heart, which Fawn promises to do just before releasing Hannah.

The next day, Fawn becomes more conservative while training rabbits to hop. Suddenly, she hears a great roar. Choosing to listen with her heart, she follows the animal's tracks to a cave, where she encounters the NeverBeast. Fawn attempts to pull a thorn out of the NeverBeast's paw and accidentally awakens him. He scares Fawn out of the cave with a roar that all of Pixie Hollow hears. Nyx becomes convinced that Fawn caused the mysterious beast to roar.

As Fawn observes the NeverBeast, she successfully removes the thorn from his paw by making him rear up so she can reach it. She continues to observe him but is discovered by Nyx. Nyx firmly tells Fawn to report the animal that made the roar if she finds it. If Nyx finds it, she will do her job. Fawn continues to do her job as she forms a bond with the NeverBeast.Fawn wakes up and sees that the NeverBeast has built a tower of rocks. She repeatedly asks him why he has built it, but he is gruff in his response, inspiring Fawn to name him Gruff. Fawn and Gruff build another tower with help from Fawn's pixie dust. Unfortunately, Gruff sends some of the rocks flying into Sunflower Meadow and destroying it. Nyx and the scout fairies follow Gruff's tracks until they see him. They chase him, but Fawn hides Gruff in the roots of trees on the beach, turning Nyx away. Nyx later visits the library and finds a piece of a pictogram with the NeverBeast.

Fawn introduces Gruff to Rosetta, Iridessa, Silvermist, Vidia, and Tinker Bell. The girls become wary of Gruff, and Fawn informs them of her plan to introduce Gruff to Queen Clarion. Fawn goes to see Queen Clarion and Nyx in the Pixie Dust Tree. Nyx has gathered all the pieces of the pictogram and deciphered them. Each time the green comet passes, it awakens the NeverBeast. Once it comes out of hibernation, it builds four rock towers, one in each season of Pixie Hollow. Green clouds will fill the sky, and the NeverBeast will transform, causing a lightning storm so powerful that it consumes all of Pixie Hollow. While distracting Nyx and Queen Clarion from the disturbances caused by Gruff, Tinker Bell and the rest of the friends take Gruff back to the forest. Queen Clarion trusts Nyx to do the right thing, which means that the scout fairies will go after the NeverBeast at dawn. Once Fawn catches up to her friends, she informs them of the "hair-brained legend" Nyx learned. She bids them goodnight and spends the rest of the night stargazing with Gruff, reminding him that she does not see a monster in him. But the ominous green clouds mentioned in the legend appear on the horizon.

The next morning, all of Pixie Hollow notices the green clouds. While the scout fairies gear up and hunt for the NeverBeast, Fawn fails to find Gruff. Tink finds her and warns her that the legend is coming true. Gruff has two more towers to build: one in Autumn and one in Winter. Tinker Bell takes Winter, and Fawn thanks her for defending Gruff, who is building the towers faster than before. Fawn sees that Gruff has just built the Autumn tower, and so do the scouts.

Meanwhile, Tinker Bell looks in Winter for Gruff and is almost struck by lightning. Just then, she finds Gruff, who charges toward her. She warns him that the scouts are coming to get him, but he knocks her unconscious. Fawn finds Tink just as Gruff grows horns and runs off. He is confronted by Nyx, who also sees Fawn and an unconscious Tink. Nyx chooses to help Fawn and Tink rather than chase Gruff.

Tinker Bell is hospitalized, and Fawn feels ashamed, so she finds him and is relieved to know he is still kind to her. The scout fairies suddenly capture Gruff and knock him out with nightshade powder. Fawn sobs as they move him out.

All of the fairies and animals in Pixie Hollow take cover from the approaching storm. Despite Gruff being immobilized, the storm has not stopped. A pinecone watchtower is hit by lightning and falls, and Nyx tells its occupants to take cover as lightning hits all four towers in Pixie Hollow simultaneously. Fawn soon finds Tink and admits that Nyx was right: Gruff is a monster. However, Tinker Bell says that Gruff was her hero. He was acting strange when she found him in Winter, but he saved her from a falling tree by knocking her aside with his tail. Convinced that Gruff is truly good, Fawn goes to help Gruff escape.

Soon after being freed, Gruff grows wings and completely transforms into the mythical monster described by Nyx. Just then, Fawn realizes that Nyx got the story backward: Gruff will not destroy Pixie Hollow. He built the towers to draw in the lightning so he can collect it. Following both her head and her heart, Fawn decides they are going to the towers.

Gruff, whose vision is blurry due to the remaining effects of the nightshade, follows Fawn's glow to the towers, collecting lightning between his horns. But before he can reach the final one, he is shot down by Nyx. Nyx realizes the error of her ways as she sees trees being struck by lightning. She is almost hit by a bolt of lightning, but Gruff catches it and saves her. Now she realizes that Gruff has good intentions. The fire is spreading fast, so Nyx goes to save the rest of the fairies.

Seeking an end to the storm, Gruff follows Fawn into the eye of the storm. Gruff's horns catch all the lightning that threatens to strike Pixie Hollow. He flies straight through the eye of the storm and successfully ends it. Fawn and Gruff fall from the sky, but they are saved by a great many fairies. Tinker Bell and friends gather around Fawn, believing she is dead. Fortunately, Gruff revives Fawn with his electricity. All of Pixie Hollow is delighted to know that Fawn is still alive.

In the end, Gruff is considered a hero to Pixie Hollow. As he helps its denizens, Fawn learns that it is time for Gruff to go back into hibernation for a thousand years. A long ceremonial procession leads him back to his cave, at the end of which Tinker Bell, Rosetta, Silvermist, Iridessa, Vidia, Fawn, and even Nyx all pay their final respects. Fawn will always be there for Gruff when he needs her.

Main article: Tinker Bell and the Legend of the NeverBeast (video) 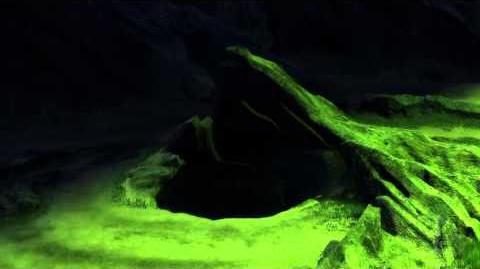 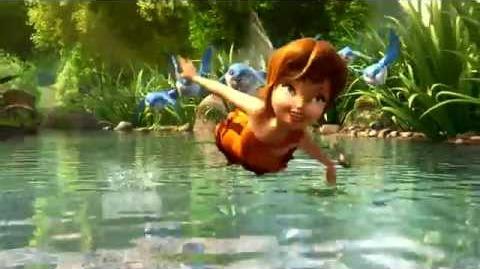 Tinker Bell and the Legend of the Neverbeast Clip – Opening Sequence 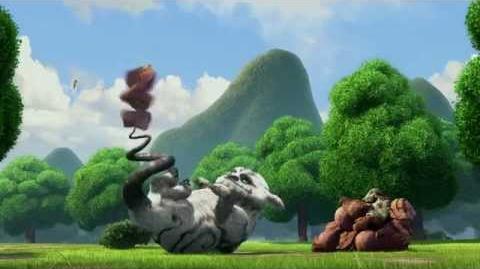 Tinker Bell and the Legend of the Neverbeast Trailer 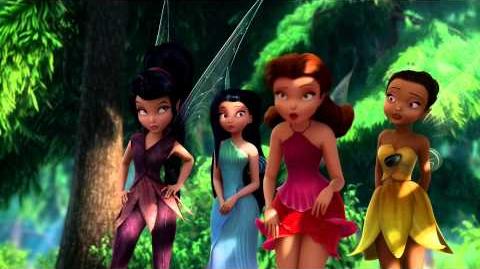 Legend of the NeverBeast - Sneaking Through nimal Grounds 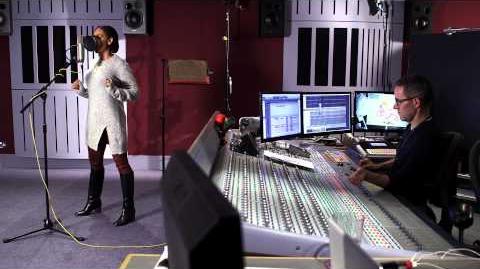 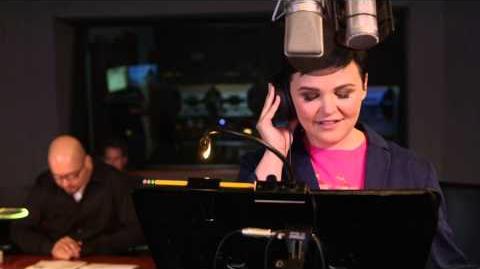 The Disney Wiki has a collection of images and media related to Tinker Bell and the Legend of the NeverBeast.