Getting broken, Billy getting hurt, Billy crying
Tinny is the protagonist of the 1988 Pixar short, Tin Toy. He is a little tin toy who runs from the baby Billy and hides under the couch with the other toys. In the end, he comes out from under the couch to play with Billy because he feels sorry for him.

Tinny serves as the short's protagonist. Throughout the short, he encounters a human baby named "Billy" who chases him across the room. During the short, Tinny hides under a couch, causing Billy to cry that he has no toy to play with. Feeling for Billy's emotion, Tinny decides to play with him after realizing the wrong actions he did.

Tinny was to be the protagonist in a very early draft of Toy Story before his character was cut altogether.[1]

In the early draft, Tinny was a toy that was bought by a man for his son's birthday party. While on a road trip with the family, he ends up getting left behind at a gas station and found by a garbage collector. While in the back of the truck, Tinny befriends a ventriloquist dummy (who would eventually transform into Woody) and the two go on an adventure that ended with them landing in a kindergarten classroom where they realize that they can be played with forever and not have to worry about being outgrown by the children.

When the setting was moved to a children's bedroom, the filmmakers realized that Tinny was not the ideal new toy that kids would want and he was eventually changed to the much more appropriate Buzz Lightyear.[2]

Tinny (now older yet still has his chipper personality) is the "owner" of the club hidden under the Tiki Party pinball machine at the Antique Store, where all the antique toys hang out. This makes it the first time that the character appears in a physical manner in a Toy Story film, not counting his cameo appearance in Toy Story 2 through archived footage.

Tinny on TV in Toy Story 2 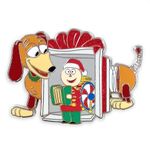 A festive pin of Slinky Dog and Tinny.