Dana Moller (1975-2017; his death)
Silvio Peter "Tino" Insana was an American actor, voice artist, producer, screenwriter, and singer. He has made brief acting appearances in filmsl such as Neighbors, Three Amigos, Who's Harry Crumb?, and Beverly Hills Cop III. He has also made guest appearances on situation comedy series, such as Night Court and Mad About You. Additionally, he voiced Pig in Barnyard and its spin-off TV series.

In 2008, Insana voiced the role of Barf in Spaceballs: The Animated Series (due to Insana's voice being strikingly similar to the late John Candy). He also voiced Mr. Grouper in Bubble Guppies, which turned out to be his final role before his death. 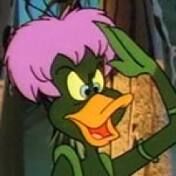