Leader of the group

Mrs. Tonitini (mother), Mr. Tonitini (father)
Tino Tonitini[3] is the de facto lead character of The Weekenders. He frequently begins each episode by breaking the fourth wall, introducing himself, and describing the situation at hand. As conflict develops during the episode, he usually asks his mother for advice. Of the four main characters, Tino is considered by his friends to be the most neurotic and weird, making his behavior the butt of many jokes. He has an irrational fear of clowns, but is able to develop a certain degree of tolerance toward them. He is also an amateur conspiracy theorist and makes obscure references to things that are bizarre, such as bats being able to breathe underwater. Though he often does things that are considered dorky, such as playing air guitar or laughing maniacally, he has the capacity for intelligent wit and will make remarks that are subtly sarcastic. Tino usually wraps up the episode by stopping after his friends have walked off, turning the camera, and stating the moral of the story. His trademark catchphrase, often delivered as his last line bidding farewell, is "Later days!" Sometimes the other three kids are featured in his place.

Tino is 12 years of age of average height and builds for his age, slender, with short blond hair and slightly tanned skin. As seen and mentioned in "Secret Admirer", Tino's head resembles a pumpkin, so Carver sometimes calls Tino "pumpkin pie," much to his annoyance.

Tino is very sarcastic, slightly paranoid on a variety of subjects, witty, and sometimes immature. He gets through his days and situations by cutting smart, sarcastic, and witty remarks whenever annoyed, insulted, or offended. When threatened, he can appear to be a bit of a coward and try to back out of something, but despite his neurotic and flighty personality, he has proven on many occasions to be resourceful, and brave. He gets annoyed easily and will often push people into doing things with a lot of pressure. Tino is generally the most tolerant, patient, and accepting of his friends, although he does have a slight peeve for the stereotypical nerd. On the whole, he is well-rounded, open-minded, and more than willing to accompany or help his friends through their many hardships and adventures.

Tino is known for being the neurotic and paranoid member of the group, having irrational fears of a variety of things, including clowns, danger, sports, insects, injuries, accidents, and more. However, Tino has managed to face his fears on several occasions, proving to others that he is not easily discouraged, although easily frightened. For example, he once successfully endures clown camp, courtesy of his friends, in order for him to "increase his tolerance" of clowns.

Tino gets indigestion in "The Perfect Weekend" 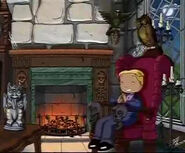 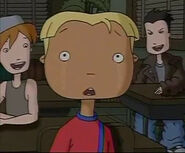 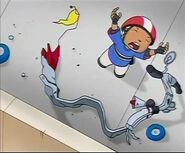 Retrieved from "https://disney.fandom.com/wiki/Tino_Tonitini?oldid=4066358"
Community content is available under CC-BY-SA unless otherwise noted.