TippyBlue is a seagull appearing in Mediterranean Harbor at Tokyo DisneySea.

TippyBlue met Duffy wild he was taking a walk before leaving with Mickey. He saw Duffy and said, Hi asking if he is Duffy? After he created him telling him he's name and what he does for leaving. Duffy said goodbye to Tippy but Tippy asked him if he goes on adventure trips with Mickey? Telling him all the bad things that could happen. Mickey over here's and sings with Tippy all the good things that cloud happened to Duffy so he wouldn't be nervous to travel. After Duffy said to Mickey that he wanted to send letters to to him from destinations. Tippy volunteered to deliver Duffy's letters and convey his feelings to Minnie trow letters because he's a postman. After he sang of all the wonderful places the could go to Duffy with Mickey, Minnie, and Daisy. Donald and Daisy asked Duffy if he could send them letters two? Duffy with a big smile said Yes!! After they took a picture and said goodbye to Mickey and Duffy.

TippyBlue appears in the show My Friend Duffy as the Narrator and one of the protagonist appearing in all three shows and as a statue at Tokyo DisneySea.

TippyBlue makes appearances true out the book. He first appeared at the beginning where he is seen on top of a box when Mickey said goodbye because he's a sea captain. Then he is seen flying to get to Steamboat Willie where Mickey and Duffy where they where looking at Tippy as he filed.

Disney Parks and Other Live Appearances 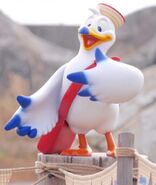 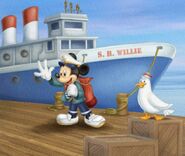 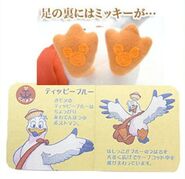