People judging her, meat, not being listened to

Tish is a straight-A student but has received at least one "B" grade, which surprised everyone and Tish herself. She is also a perfectionist and a vegetarian. Tish enjoys reading, classical music, art, and solving math problems in her head during her free time. She also greatly admires William Shakespeare. Tish considers herself the most cultured and sophisticated of the four, and she often attempts to convince her friends to participate in high-society activities, such as visiting the museum or an art show.

She is often the one to give advice to her best friend, Lor. Although it is never stated which country her family comes from, it is implied that she is of Eastern European Jewish descent and both of her parents are immigrants to the United States. Her name, "Tish", is short for Petratishkovna—which, according to her parents, means "girl with one nose".

Tish is 12 years old, average height and build for a girl of her age, has long auburn hair and fair skin.

Tish is considered the smart one of the group, being skilled in a wide variety of arts and sciences. She usually speaks and expresses her opinions in a factual or literal matter, seldom hesitates to correct her friends, and often backs up her opinions by quoting famous people in history, most often of her idol William Shakespeare.

She has a tendency to be a perfectionist, often freaking out over minor mistakes or miscalculations in her data, but nonetheless carries herself with a high degree of self-confidence and assurance. Despite often being teased by her friends about her intellect, lack of athletic abilities and obsession with academics, she is respected and appreciated by her friends to an extensive degree, and for the most part willing to accompany them on their countless adventures. Tish's intellect and responsible persona cause her to act as the group's "voice of reason". However, she is seldom listened to, which often frustrates her.

Tish spends the majority of her life with her four friends but is probably the most different from them in terms of hobbies and past-times, one of the most distinct being the fact that she is a vegetarian.

Tish's main life's passion is intellect, which she often uses to either assist, change the opinions of, or annoy her friends. It was originally Tish's idea to make the museum a common hang-out spot for her friends, although they were initially opposing this idea. However, her friends have grown to like visiting the museum and other intellectual locations almost as much as she does.

Despite being best friends with Lor, they have rather opposing personalities and interests. While Lor is athletic, tomboyish, and has an interest in sports and virtually any type of vigorous activity, Tish is more laid-back, lacks the athletic skill, and tries to distance herself from activities involving physical contact, fast movement, balance or speed.

Tish has a wide variety of interests in the arts. Throughout the series, Tish has shown a passion for sculpting, painting, pottery, poetry, novelty, history, and theatrical productions. Although her friends sometimes find this trend weird, they are quite accepting of it, and often accompany Tish during her activities of choice.

She commonly wears a blouse with a skirt, and they are usually a light shade of purple and pink.

Tish can have her hair hang to her back, have it in a plait or have it in two buns on either side of her head. 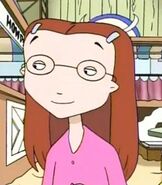 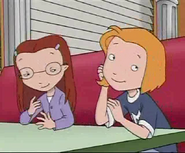 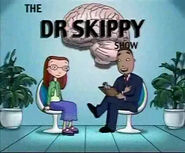 Retrieved from "https://disney.fandom.com/wiki/Tish_Katsufrakis?oldid=4404150"
Community content is available under CC-BY-SA unless otherwise noted.