At the start of "Through the Reading Glasses", Tisha and Doc are drawing pictures, and Doc shows Tisha her picture of her and Tisha. Mr. McStuffins comes in and tells Tisha to get home before the snow gets too deep. Before Tisha goes, she gives Doc Professor Hootsburgh, her former stuffed owl, and goes home. 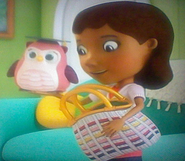 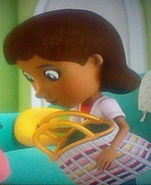