This article is about the Gargoyles character. For the Marvel character, see Titania.

Queen of the Third Race

Fox Xanatos (daughter, with Renard)
Titania is a minor character from the Disney animated television show, Gargoyles. She is the wife of Oberon and Queen of the Third race.

She is good, generous, and beautiful. Unlike Oberon, she likes to control events through subtle influences. She is so skilled in acting that way that it appears that everyone decides their courses of action for themselves. Titania also uses this ability to have control over Oberon to the point where she can sway him to do whatever it is that she desires. Through him, she is the mother of two children, one male, and one female, but their identities are still unrevealed, and through her mortal form, Anastasia Renard, she has another daughter by Halcyon Renard, Janine "Fox" Renard, and, through Fox, a grandson, Alexander Fox Xanatos.

According to Oberon, she once disdained humans with such disregard that Oberon divorced her. During the Thousand Year Exile from Avalon, Titania took to studying "the human magic called Science", and became a skilled scientist, through which she met Halcyon Renard.

Her time among humans has made her more empathic to them, having come to know the good and love that they're capable of, as well as what the worst among them can do.

Queen Mab was against the relationship between Titania and her son, Oberon. She referred to Titania as "a spoiled brat" and "a fae that was beneath her son." But when Oberon overthrew Mab, they got married and Lady Titania took the title "Queen." (It's said that Titania was very young when she and Oberon got married the first time.)

During this time, Titania was very arrogant and coldhearted towards "the lower beings." One of her acts against them made Oberon so angry that they divorced and he banished all of his kind from Avalon until they learned how to have compassion for mortals.

Titania matured during the millennium-long banishment Oberon levied. Oberon certainly seemed to appreciate the change when they are reunited and the two remarry. She also expressed a keen interest in "the human magic known as 'science'" over her centuries of exile, learning much of the human sciences. As "Anastasia Renard," her human alias, she gained quite a reputation as a scientist in numerous fields. And, she was renowned for her work in robotic-engineering, nano-technology, and bio-chemistry, all three fields that she and her ex-husband Renard's company specialized in.

As Anastasia Renard, Titania was the ex-wife of Halcyon Renard and mother of Fox. It is through her union with Halcyon that Fox's son Alexander and, to a lesser extent, Fox herself came to possess limited magical powers. In preparation for "The Gathering," she tried to take Alexander back to Avalon with her with the help of Oberon but was thwarted. Though, it was shown that her failure to do so was all her idea from the beginning.

Titania was the only member of the third race to appear in The Goliath Chronicles. In the episode "...For It May Come True," she had used the same reality manipulation powers as Puck did in his attempts to acquire the Phoenix Gate. In the episode "Future Tense", she created an alternate present in order to manipulate Goliath.

Greg Weisman stated that Titania, like Oberon, is connected with power, and through her magic, she can do anything she desires within the common limits of the fairies. Her magic, like other fairies, doesn't work directly on iron and because of Oberon's law, she cannot influence lives of mortals directly as Titania. However it is implied, that she does not suffer from either of these limitations as Anastasia, unlike Puck as Owen does and The Banshee as Molly did, due to her fields of expertise and her relationship with both Renard and Fox. Aside from those two restrictions her magic, like Oberon's, is bound only by the limits of her imagination. Titania prefers to stay in the background and uses her power with deliberation. But the abilities she has shown are:

In "Ill Met by Moonlight" she was also able to weaken Oberon's powers through a spell (and maybe retain them in her body). 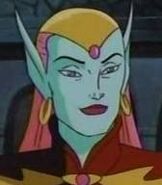