Hercules
Once Upon a Halloween

Hercules Victory Parade (Lythos, Hydros, and Cyclops only)
Sorcerers of the Magic Kingdom (Lythos only)
Wonderful World of Animation (Cyclops only)
World of Color: Villainous!

The Titans are supporting antagonists in the 1997 Disney animated feature film, Hercules. They are portrayed as four elemental monsters who terrorized Ancient Greece. They were each the physical manifestation of the element they controlled. Though based on Greek mythology, these "Titans" were original creations for the film. Hercules: The Series featured Titan characters from actual Greek mythology.

The Mountain King: A two-headed Titan made completely out of rock. He ripped through the gates of Mt. Olympus, and is the physical manifestation of earth. He appears to be a large two-headed boulder creature with glowing red eyes. The inside of his mouth is red as well. Since he is very large and heavy, Lythos has the ability to stomp on the ground and cause massive earthquakes. He was voiced by Corey Burton (right head) and Patrick Pinney (left head).

The Lurker: A skeletal Titan made completely out of ice. He teamed up with Pyros to engulf Zeus into the Earth. He is the physical manifestation of ice. He was voiced by Jim Ward.

The Lord of Flame: A blob-like Titan made completely out of lava. He teamed up with Hydros to engulf Zeus in the Earth. He is the physical manifestation of fire. He was voiced by Jim Cummings.

The Mystic Voice: A tornado-like Titan with tornado arms, red eyes, and a red mouth. He was captured by Hercules to suck up the other titans and destroy them. He is the physical manifestation of air. He was voiced by Corey Burton.

A fat, pink Cyclops-like creature that Hades had attack Hercules instead of Zeus. During his assault on Thebes, Hercules was able to defeat it despite his powerlessness, just before the impact of his fall knocked over a pillar that crushed Meg. He is the physical manifestation of ether. He was voiced by Patrick Pinney in the original film and Bill Fagerbakke in the TV series. 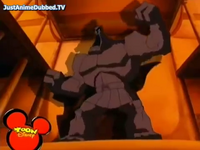 A half-Titan, half-Giant who disguised himself as a human and founded the People's Organization of Titanic Liberators, with his main goal being to free the imprisoned Titans. He appeared in the Hercules TV series episode "Hercules and the Hostage Crisis". 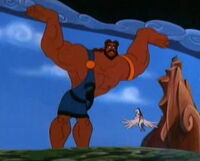 A muscular human-like Titan that was cursed by the Gods to forever hold up the sky at the Edge of the World. He constantly tries to trick people into switching places with him. He was voiced by Thomas Lennon. 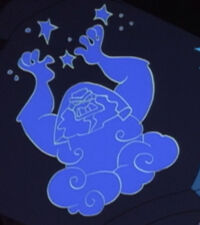 The former ruler of the universe (or at least the country of Greece) and father of Zeus, Poseidon and Hades. When he found out one of his children would overthrow him he tried to swallow them whole, however he was defeated by Zeus and as a last act he created the Kronos Stone. The stone would place any god that comes near it into an eternal sleep. Hades hoped to use the stone to overthrow Zeus. Kronos was sealed in an unknown region of Tartarus. 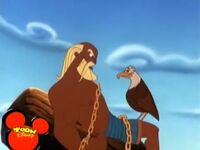 A kindly human-like Titan who long ago stole the gift of fire from Mount Olympus and gave it to humanity so they could improve their lives. However, Zeus was angered by Prometheus' disobedience and so he chained him to a mountain in Tartarus where a giant eagle would come each day to feast on Prometheus' liver, which would regenerate after each day. Hercules freed him after he realized the injustice Prometheus suffered. 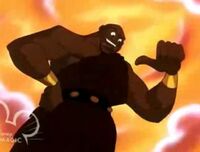 He is a powerful giant said to have a hundred hands. Despite being called the "Hundred Handed One", he only has two visible arms. The reason he is called this is because he can sprout over a hundred hands from any terrain. Depending on the terrain that the hand is summoned it will take on the element of the terrain such as if it is summoned in a body of water, a rocky terrain or on a plant it will take on the attributes and physical appearance of the terrain. He is also an open comic book fan, and a big follower of Miklos. He's based on the Hecatoncheires of Greek mythology, specifically Briareos. 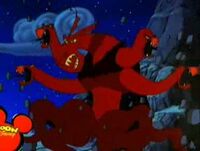 Also known as "The Father of All Monsters", he is a red, five-headed, dragon-like Titan who long ago was sealed away by Zeus under Mount Etna. He was accidentally freed by Hercules while he was fighting Typhon's wife Echidna. He seems to suffer from chronic headaches due to all the years he spent under Mount Etna. 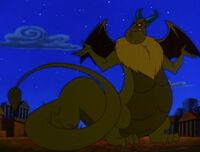 Also known as "The Mother of All Monsters", she is the wife of Typhon. Echidna had a recurring role in the series, and was typically seen as an obsessive and doting mother to her various children, who one-by-one were defeated by Hercules.

The Muses tell the legend of the Titans through their song "The Gospel Truth". The Titans were the rulers of the world (or at least Greece) when it was first new and they caused mayhem and destruction wherever they went. In the animated series, it was also explained that they were led by their king Kronos. Then along came Zeus who used all his power to unleash a mighty thunderbolt that would imprison them beneath the seas of Tartarus where they would remain until the next planetary alignment. They were the children of Gaia and Uranus.

Hades plotted to release the Titans to overthrow Zeus and rule the world but was warned by the Fates that his plan would fail if Hercules intervened. After getting Hercules to surrender his super-strength in exchange for no harm coming to Megara, Hades frees the Titans, who were hungry for revenge against Zeus. The Titans begin a path of devastation, before being told by Hades that they're headed in the opposite direction of Mount Olympus. They overpower the gods in quick succession. However, he sends the Cyclops to take care of Hercules in Thebes. Despite not having his strength, Hercules is able to use his brains, throwing a torch in the Cyclops' eye, causing him to scream in pain, and then tying the Cyclops' legs together with a rope, causing him to fall off a cliff. In the course of the battle, Hercules regained his strength after Meg was mortally wounded, and proceeded to battle the Titans and free the gods. He then encounters and captures Stratos before using him to suck up Lythos, Hydros, and Pyros in his head and Hercules proceeded to throw the Titans into space, where the impact resulted in a spectacular cosmic explosion.

The four Titans seen in the film make brief cameos in the series, usually they are almost freed by the actions of Hades but stopped by the intervention of Hercules. Aside from them, other Titans from Greek mythology also appear or are mentioned, including more neutral Titans such as Prometheus and Briares. In "Hercules and the Big Kiss", Hercules once swore upon his reputation as a hero, to help Cassandra against beasts, like invading Titans and zillion-headed Hydras, though expressed disappointment when it was only a vision of Cassandra kissing Icarus.

The Cyclops was the 1st obstacle that the player faced in the Underworld (indicating that he either may have survived the fall in the film and therefor the last remaining Titan, or he ended up in the Underworld following his defeat). His weakness is his eye (just a single hit there will instantly defeat him), but he'll usually cover it when the player shoots thunderbolts at it even when he throws fireballs back. For an easy way to expose his eye, the player can use the power of stealth to fool him into doing so.

The goal of the Hercules game is to use Pegasus to keep the Titans from reaching Olympus.

The Titans are the enemies encountered in the Hercules world, Olympus Coliseum. Prior to the series' third installment, only two of the four Titans (Lythos and Hydros) appeared.

In Kingdom Hearts, the Rock Titan appears as a boss and the final contender for the Hades Cup, and is defeated by the teamwork of Sora, Donald, and Goofy. The Ice Titan also appears as an optional boss in the Gold Match, where Sora has to defeat him alone.

In Kingdom Hearts II, the Rock Titan makes a cameo in the opening cinematic for Olympus Coliseum where he was thrown out of the Coliseum by Hercules.

In Birth By Sleep, The Ice Titan, or rather a copy of it, appears as the Ice Colossus. It is summoned by Hades in a duel against Aqua. Because the Colossus is only a replica, however, its strength was inferior to the real Ice Titan and is easily defeated by Aqua.

In Kingdom Hearts III, all four Titans appear in Olympus under the leadership of Hades. Lythos, Hydros, Pyros and Stratos have major boss battles against Sora.

The Titans realize they're going the wrong way

The defeat of the Titans 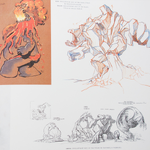 Titans involved in a tug-o-war against Kingdom Hearts heroes