2005–present
Tituss Burgess is an American actor and singer, who is best known for his high tenor voice and his Primetime Emmy-nominated portrayal of Titus Andromedon in the Netflix comedy series, Unbreakable Kimmy Schmidt.

For Disney, he originated the roles of Sebastian in the original Broadway production of The Little Mermaid and Remy in the 2021 Benefit Concert of Ratatouille the Musical. He also lent his voice for the character Charoca in Elena of Avalor. 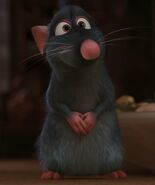