Toadstool upset, his belongings getting destroyed

Mayor Toadstool (boyfriend)
Toadie is a supporting character in the 2019 animated series, Amphibia. He is the loyal trusted advisor of Mayor Toadstool.

Toadie appears very loyal and pleasing to Mayor Toadstool and assists him on any occasion. Because of Toadie's devotion to Toadstool, he obeys every order the mayor gives him and does not hold any opinions or think for himself.

Toadie is a paled skinned frog with grey parted hair. He has darker spots along the back of his body and a lighter underbelly. He often wears a formal suit including a white shirt under a black jacket, purple dress pants, and a red bow tie.

In "Anne or Beast?", Toadie listens to One-Eyed Wally describe his encounter with a monster in the woods. Toadie and Mayor Toadstool joined a mob to hunt down the monster. Then captured the monster who turn out to be a human girl named Anne Boonchuy and they wanted to kill her until a giant praying mantis came, they tried to fight in mantis formation, but were overpowered. Sprig Plantar help free Anne and defeated the mantis, Toadie left with the mob after Hop Pop Plantar promised the townsfolk he'll keep an eye on Anne and Sprig.

In "Breakout Star", Toadie comforts Mayor Toadstool when he becomes distressed over his poll numbers dropping down. When Anne grows popular in Wartwood for having pimples, Toadie assists Toadstool in using Anne to get his poll numbers back up. However, after Anne decides to stop being popular due to no longer having zits, Toadie watches Toadstool get humiliated and pelted with fruit after he accidentally the citizens "idiots" during his rant against Anne.

In "Girl Time", Toadie is amongst the crowd who witnesses Polly Plantar break Wartwood's spitting record.

Nine months after the events of "The Hardest Thing", Toadie is shown to have been elected as the new mayor of Wartwood with Toadstool as his advisor. 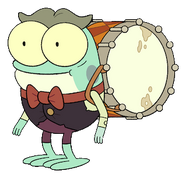