To profit from unsold Coaxium and transport it to many different gangs, such as the Crimson Dawn and become both rich and powerful (failed)
To manipulate Han Solo and eventually murder him (failed)

“I prefer to be the only one holding a blaster while doing it. ”
― Beckett betraying both Han and Vos, revealing his ultimate scheme.

Tobias Beckett is the (former) tritagonist turned secondary antagonist of Solo. He was Han Solo's mentor. However, Tobias was a deceptive and tyrannical person who worked closely to Crimson Dawn and their leader, Dryden Vos. Plotting to sell unsold Coaxium, Beckett manipulates both Dryden and Han as part of his plans to gain control of the criminal underworld.

Beckett at first employs Han Solo to The Imperial Academy. He reveals to Han that he was pretending to be an Imperial officer, just to steal a coaxium generator. He then sends Han to be eaten by Chewbacca, only to rescue him secretly later. He then discusses with Han and his crew around the bonfire, and Han reveals about Qi'ra being his girlfriend, once upon a time. Later, Tobias and Han steal the coaxium. Beckett reveals that he is planning to transport it to a crime gang called The Crimson Dawn, led by his ally, Dryden Vos. He explained to Han that if they don't transport it to Vos, then the Crimson Dawn will kill him for breaking their deal, but that if he does, they will both be rich. Later, Beckett meets with Dryden Vos, who is disappointed about his failure to transport the coaxium to the Crimson Dawn. Han Solo, however, reveals a location of unrefined coaxium, which they can use to create a new generator. Dryden gave Beckett another opportunity to transport it and gain the money in return. He sent Han Solo as a pilot and Qira to accompany them both.

Beckett during the start of the journey told Han not to trust anyone, specifically not Qira, so he could manipulate Han into becoming his best friend, and therefore, he can use him to rob the Crimson Dawn and transport it to another crime gang on Tatooine. Han used fake coaxium for creating the generator, however, Tobias, who seemed to support his plans to cheat Dryden Vos, has actually reported to Vos and the Crimson Dawn about Han's tricks and plans. Tobias then sent mercenaries to find the generator of the real coaxium. However, it was revealed that Han stole it on time from the Cloud Raiders before Beckett could take it from them. Beckett then revealed that he has been using Crimson Dawn and Solo to rob Vos' money, and to make a profit from something he wouldn't really sell. He then took Chewbacca as hostage, and went off to transport the coaxium to the gang on Tatooine.

Han Solo ran after him and eventually he caught up with Beckett, who was on his way to a Crimson Dawn ship. Beckett told Han once again not to trust Qira, as she does not love him and is only surviving for herself. Han, however, replied that Beckett has a problem; he manipulates everyone and causes them to distrust everyone, to gain all the money - and therefore the only one who cannot be trusted is Beckett. He then admits that he manipulated Solo, and adds that they weren't really friends. He was going to tell Han the most important thing about his scheme, but Han shot him to death out of anger. As Beckett fell on the floor, Han came closer to hear the important thing which Beckett had to tell him. Beckett revealed that he would have killed Han, but that he still appreciates Han's "problem"; Han is a good person who does not cheat or murder others for money.

Although he seemed like a good man and father figure to Han Solo, Beckett was a greedy, egotistical and ruthless individual who manipulates Han, as well as many different crime organizations for his own benefit. Although Dryden was seemingly the direct threat during the film, Beckett revealed a far worse and more threatening plan which was to transport the coaxium generator to many different gangs and gain money by not selling it properly. At the end, although he does pay his price, he also gets to show some remorse towards Han. However, that was only because he was dying and he had no other chance. 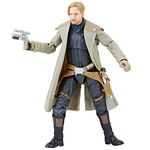 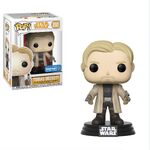 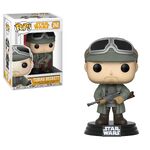 Retrieved from "https://disney.fandom.com/wiki/Tobias_Beckett?oldid=3357089"
Community content is available under CC-BY-SA unless otherwise noted.