Disney Wiki
Register
Don't have an account?
Sign In
Advertisement
in: Characters, The Great Mouse Detective characters, Dogs,
and 10 more

“Toby has the most splendid sense of smell of any hound I've trained. But he can be decucedly frisky.”
―Basil[src]

Toby is a Basset Hound from Disney's 1986 feature film, The Great Mouse Detective. He belongs to Sherlock Holmes, who lives above Basil.

In the movie, Toby is the dog of Sherlock Holmes, who lives above Basil of Baker Street. Although he is Holmes' dog, he helps Basil solve cases, too, and is perhaps Basil's most loyal friend (next to Dr. Dawson). When Basil, Olivia, and Dr, Dawson go to find Toby, Olivia and Dr. Dawson both ask who Toby is and then he appears as Basil calls him. Basil introduces Dr. Dawson to Toby first, to which Toby sniffs Dawson and growls at him, but Basil tells Toby to back down. Then Toby smells Olivia and immediately takes a good liking to her and she gives him one of Mrs. Judson's cheese crumpets to eat and she also rubs his belly. Then Basil asks Toby to sniff out Fidget the bat's hat in order to find Fidget, who will lead them to find Olivia's father, who was kidnapped by Fidget earlier in the film. After Toby sniffs out Fidget, Basil, Dr. Dawson and Olivia climb on him and he takes them to a toy shop in town, where Fidget is stealing stuff for his boss, Professor Ratigan.

When they arrive, Toby's howl warns Fidget, who hides. Toby allows Basil and Olivia to get off, but he growls at Dr. Dawson and sneezes, causing Dawson to tumble into Basil. Then Basil tells Toby to sit, but he remains to stand; however, when Olivia tells Toby to sit, Toby obeys and sits. Later on, as Fidget tries to escape out the door with Olivia in his bag, Toby growls at him, but Fidget manages to take another exit. Toby then takes Basil and Dawson back to Baker Street.

Later on, when Basil and Dawson discover that Fidget has been drinking beer from a pub where the sewer connects to the waterfront, Toby takes them to the waterfront and Basil tells him to stay put to (which he does). After escaping Ratigan's traps and rescuing Olivia, Basil calls for Toby to take them to Buckingham Palace, where Ratigan and his minions are trying to kill the Queen and rule the kingdom. They arrive just in time for Basil to save the Queen Mouse from being fed to Ratigan's cat, Felicia, and Toby chases Felicia away. Toby tries to catch Felicia but she manages to escape over a brick wall, only to be mauled by royal guard dogs on the other side.

After the case is solved and Ratigan and his minions are defeated, Toby is last seen listening to Basil's next case, in which a lady mouse has lost her ring.

Toby listens to Basil's next case 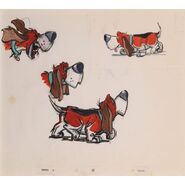 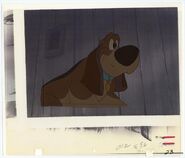