“Now the number that opens our Fantasia program, the Toccata and Fugue is music of this third kind. What we call, absolute music, even the title has no meaning beyond a description of the form of the music. What you will see on the screen is a picture of the various abstract images that might pass through your mind, if you sat in a concert hall listening to this music. At first you're more or less conscious of the orchestra. So, our picture opens with a series of impressions of the conductor and the players. Then, the music begins to suggest other things to your imagination. They might be... oh, just masses of color. Or there may be cloud forms, or great landscapes, or vague shadows, or geometrical objects floating in space.”
―Deems Taylor[src]

Johann Sebastian Bach's Toccata and Fugue in D Minor is the first segment of the film, Fantasia. 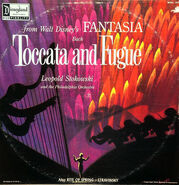