This article is about the theme park located at Tokyo Disney Resort in Japan. For the cancelled theme park, see DisneySea.

Reopened (with a limited capacity of park admissions)

Welcome one and all to a world where Imagination and Adventure set sail. Tokyo DisneySea is dedicated to the spirit of exploration that lives in each of us. Here we chart a course for Adventure, Romance, Discovery and Fun and journey to exotic and fanciful Ports of Call. May Tokyo DisneySea inspire the hearts and minds of all of us who share the water planet, Earth. - Michael D. Eisner, September 4, 2001

Tokyo DisneySea has an overall nautical exploration theme to it. The idea for the park can be traced to a proposal to build a second theme park in Southern California called "DisneySeas" in Long Beach, California. However the idea was scrapped after the company endured financial trouble with the Euro Disney project, as well as opposition from environmental groups regarding the amount of landfill that would be required for the entire Port Disney project. Later the idea was passed on to the Oriental Land Company to expand their resort. Unlike Tokyo Disneyland, the overall intention was to create a more adult-themed park, including faster, scarier rides, and shows designed more for an older audience. By the time Tokyo DisneySea opened in 2001, its concepts and designs had been in development at Walt Disney Imagineering for well over 20 years.

In 2015, it was announced that an eighth port, based around Frozen, would open in 2017 under the working name "Scandinavia". In 2018, it was announced that this concept was revised to include Tangled and Peter Pan as a new area called Fantasy Springs and serve as the biggest expansion to the park to date. Additionally, a new hotel would be connected to this port. It is planned to open in 2023.

The park's two symbols are the DisneySea AquaSphere, similar to the Universal Studios metal globe - a water fountain with a large model of the earth - in the entrance plaza, and the gigantic volcano, Mount Prometheus, located in the center of the park. The volcano and Cinderella Castle in Tokyo Disneyland, the other park in the resort, are exactly the same height.

The DisneySea AquaSphere, the icon of Tokyo DisneySea. 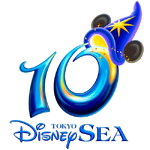