Reopened (with a limited capacity of park admissions)

“The Kingdom of dreams and magic.”
―Official slogan

The park was built by Disney's Imagineers during the early 80s, to the specifications of the Oriental Land Company. The company asked Disney for a near replica of the Magic Kingdom, in Florida, with the best of Disneyland along the way. Construction of the park went so smoothly, everything was ready two months before opening day. The pavements were built very large to accommodate the large Japanese crowds, but in later years as attendance has slowly declined some paths have been shortened, freeing up space for attractions. To this day the hub, which is usually quite small at other parks, is a massive expanse of pavement, occasionally disrupted with the odd statue or bench.

This park is not surrounded by a train due to Japanese railway regulations at the time of the park's opening mandating that trains stopping at multiple stations adhere to a timetable and charge fares, meaning a Tokyo Disneyland Railroad would have to have a posted schedule and be an upcharge attraction. Although it does not have a train surrounding the park, it has a similar train called Western River Railroad that only goes around Adventureland, Westernland, and Critter Country.

“To all of you who come to this happy place, welcome. Here you will discover enchanted lands of Fantasy and Adventure, Yesterday and Tomorrow. May Tokyo Disneyland be an eternal source of joy, laughter, inspiration, and imagination to the peoples of the world. And may this magical kingdom be an enduring symbol of the spirit of cooperation and friendship between the great nations of Japan and the United States of America.”
―E. Cardon Walker, April 15, 1983 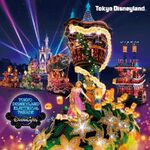