Animator
Thomas D. "Tom" Bancroft is an American Disney animator from the Long Beach, California area, who is best known for his creation of the Mulan character, Mushu. He stayed with Disney for about thirteen years, working on approximately nine features, until he left in 2000. He is mainly a character designer and animator for various companies, but Disney has been his main art-related job. He is currently working with fellow Disney alum and friend, Rob Corley in the Funnypages Productions in Florida. He also has a twin brother, Tony Bancroft, who also has a Disney animation history. 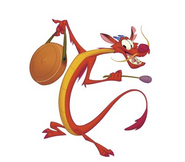 Tom Bancroft is a huge fan of the Tennessee Titans.[1][2]