Samantha Bergeron
Jessica Bergeron
Tom Bergeron is an American television personality, game show host, and comedian who is best known for being the host of America's Funniest Home Videos and the reality competition series Dancing with the Stars, both on ABC.

For Disney, he guest starred on Take Two with Phineas and Ferb and voiced the announcer in the Phineas and Ferb episode "Bullseye!" He also made a cameo appearance as himself in The Muppet Show and The Muppets and played Bobby Mann in the ABC TV show, Castle. 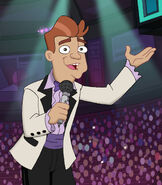 Announcer
(Phineas and Ferb)
Add a photo to this gallery

Retrieved from "https://disney.fandom.com/wiki/Tom_Bergeron?oldid=4104679"
Community content is available under CC-BY-SA unless otherwise noted.