Disney Wiki
Register
Don't have an account?
Sign In
Advertisement
in: Article of the week, People, Males,
and 20 more
English

Not to be confused with Tom Hollander.

Prior to working for Disney, Tom Holland was best known for playing the titular role in Billy Elliot the Musical on the West End, a role for which he was first cast in 2008.

In 2011, he made his Walt Disney Pictures debut, voicing Shō in the UK dub of The Secret World of Arrietty.

While working on the 2015 film, In the Heart of the Sea, Holland met Chris Hemsworth, who plays Thor in the Marvel Cinematic Universe. When it was announced that The Amazing Spider-Man franchise would be rebooted, and the character joining the franchise in co-productions between Sony Pictures and Marvel Studios, Holland emailed Hemsworth to ask if he could put a good word in to Marvel Studios for his audition.[1] As of April 2015, he was one of five actors reported to be on the shortlist for the role, a list that included Asa Butterfield and Timothée Chalamet.[2] On June 23, Tom Holland was cast as Spider-Man in the Marvel Cinematic Universe, starting with the 2016 film, Captain America: Civil War.[3] He reprised the role in Spider-Man: Homecoming, Avengers: Infinity War, Avengers: Endgame, Spider-Man: Far From Home, and is set to do so again in Spider-Man: No Way Home and an as-yet unannounced Marvel Studios production.[4] He also portrayed the character in the upcoming Avengers Campus attraction, Web Slingers: A Spider-Man Adventure. In 2021, it was confirmed Holland will continue playing Spider-Man for another trilogy in the MCU.[5]

Tom Holland at premiere of Spider-Man Homecoming in June 2017.

Tom Holland at premiere of Avengers: Infinity War in April 2018.

Tom Holland and Will Smith at premiere of Spies in Disguise in December 2019.

Tom Holland behind the scenes of Onward. 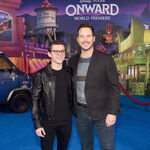 Tom Holland and Chris Pratt at premiere of Onward in February 2020.

Tom Holland at the launch of the Spider-Man: No Way Home trailer

Tom Holland with girlfriend Zendaya and co-star Jacob Batalon, reactmg to the trailer of Spider-Man: No Way Home

Tom with girlfriend Zendaya at the Ballon Dor Event, November 2021.

Tom Holland and Zendaya on the first day of Spider-Man: No Way Home press tour, November 29, 2021

Tom with with Spider-Man co-star Jacob Batalon and co-star/girlfriend Zendaya at a Spider-Man No Way Home photocall in London, December 5, 2021