Mack and Nora
Thomas James "Tom" Kenny is an American actor, voice actor, comedian, and voice director. He is best known for voicing the popular SpongeBob SquarePants in the Nickelodeon animated series of the same name, along with Gary, The French Narrator, and playing Patchy the Pirate. He is also known for voicing the Mayor and Narrator in Cartoon Network's The Powerpuff Girls, among other various cartoon characters.

Kenny has done work on multiple Disney productions, most notably being the current voice of Rabbit in the 2011 Winnie the Pooh film onward (replacing Ken Sansom after his death in October 2012). He also provided the first audible voice for Fethry Duck. 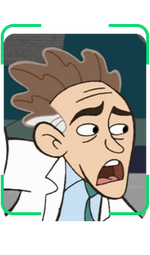 Bon Bon the Birthday Clown
(Star vs. the Forces of Evil)

"Moon Beast and You" Narrator
(The Emperor's New School)

Doc Hudson
(Cars on the Road)

The Dung Brothers
(It's Tough to Be a Bug!)

Tom Kenny at the premiere of Winnie the Pooh in July 2011.