July 17, 1955
Tomorrowland is one of the five original "lands" of Disneyland, themed to the future and outer space. It opened along with the park on July 17, 1955, and had its largest overhaul in 1967, and was modified again in 1998. It is home to major attractions such as Space Mountain and Star Tours.

In early designs of Disneyland, Tomorrowland was referred to as the "World of Tomorrow", with early plans including moving sidewalks and suspended monorail systems. The land itself would be set in the then far-off year of 1986.

Tomorrowland was the last land to complete construction, with several of its attractions not yet ready to open with the rest of the park on July 17, 1955, such as Rocket to the Moon, whose iconic Moonliner rocket was the tallest structure at Disneyland before the construction of the Matterhorn. A majority of the initial attractions in the original Tomorrowland were corporate exhibits, such as the Monsanto Hall of Chemistry and the Dutch Boy Paint Gallery. Major attractions were not exempt from this either. Richfield Oil sponsored Autopia, Trans World Airlines sponsored Rocket to the Moon, and American Motors sponsored Circarama. The Nautilus submarine from the 1954 film, 20,000 Leagues Under the Sea was the centerpiece of an exhibit of the film's sets and props, an attraction that lasted until 1966. In 1956, the Skyway aerial gondola lift was added, providing transport to Fantasyland.

In 1957, the Monsanto House of the Future opened near the entrance to Tomorrowland, adjacent to Circarama.

1958 saw the addition of a station for the Disneyland Railroad.

In 1959, Tomorrowland received several major new attractions: the Disneyland-ALWEG Monorail System, the Matterhorn Bobsleds (now officially a Fantasyland attraction), and Submarine Voyage. All three attractions still operate today in some form or another. The Disneyland-ALWEG Monorail was the first permanent monorail system in the entire western hemisphere, though only operated as a sightseeing attraction until 1961, when the track was extended to the Disneyland Hotel, adding a second station, making the attraction a legitimate transportation system.

On July 2, 1967, an updated, rebuilt Tomorrowland celebrated its grand opening. The new Tomorrowland featured such additions as Adventure Thru Inner Space, an updated Autopia, Carousel of Progress, Circle-Vision 360°, PeopleMover, Rocket Jets, and Tomorrowland Terrace, in addition to the Disneyland Monorail System, Matterhorn Bobsleds, Monsanto House of the Future (which closed shortly after, however), Rocket to the Moon (by this time operating as Flight to the Moon), Skyway, and Submarine Voyage, all from the previous incarnation of Tomorrowland. A massive new thrill ride, Space Mountain was planned for this new Tomorrowland, but was shelved after the 1966 death of Walt Disney. In 1973, Carousel of Progress closed and was moved to Tomorrowland at Walt Disney World's Magic Kingdom in 1975, where it still operates today. In 1974, America Sings, a humorous show featuring the history of American music, opened in its place. In 1975, Flight to the Moon was replaced by Mission to Mars.

In 1986, Captain EO, a 3-D film starring Michael Jackson and produced by George Lucas, opened in the Magic Eye Theater underneath Space Mountain.

In 1988, America Sings closed, allowing a majority of its Audio-Animatronic animal characters to be reused for the soon-to-open Splash Mountain. Two geese characters had been removed the previous year, stripped down, and placed in Star Tours as droids G2-4T and G2-9T.

By the 1990s, several Tomorrowland attractions began to close. Mission to Mars met its demise in 1992, with the PeopleMover closing in 1995, and Circle-Vision 360° and the Rocket Jets following in 1997. The latter three closed in preparation for a new Tomorrowland, the first overhaul in over 30 years.

1998 saw the opening of an updated Tomorrowland, with the theme now focusing on retrofuturism, similar to Disneyland Paris' Discoveryland. The blue and white paint scheme gave way to gold and brown, for a Jules Verne inspired look. New additions included Astro Orbitor, Cosmic Waves, Innoventions, Rocket Rods, Honey, I Shrunk the Audience, The American Space Experience, the Observatron, and Redd Rockett's Pizza Port. Autopia, the Disneyland Monorail, Space Mountain, Starcade, Star Tours, Submarine Voyage, and Tomorrowland Terrace all remained with mostly only cosmetic changes. The former Circle-Vision 360° attraction still remained, though as a part of the Rocket Rods queue. The new Tomorrowland was plagued by budget cuts and is considered by many Disneyland fans to be a failure.

Rocket Rods, the centerpiece of the New Tomorrowland, faced problems from the start, as it was a high-speed attraction which ran on the former tracks of the slow-moving PeopleMover. Budget cuts eliminated the possibility for banked turns, which required the Rocket Rod vehicles to brake before every significant turn. This constant accelerating and braking took its toll on the vehicles, leading to the ride being closed for much of its first summer. The attraction eventually reopened, but closed again in September 2000 for refurbishment with the promise that the ride would open in Spring 2001, when it was expected that many of the attraction's problems would be fixed, but no work was done at all. In April 2001, Disney finally admitted that the ride would never reopen. The track is still standing as of 2019.

The Observatron is a kinetic sculpture utilizing the ride system of the former Rocket Jets attraction, replacing the rockets with faux satellite dishes. Every 15 minutes, the Observatron would play music and move, though the sculpture has worked sporadically over the years. The classic Submarine Voyage attraction closed in September 1998, due to reportedly high operational cost. Two other New Tomorrowland attractions had short lives: the Cosmic Waves, a series of walkthrough fountains, was removed around 2002 after guests essentially turned it into a public communal bath. The American Space Experience closed in 2003.

In 2000, the 1967-era Tomorrowland and Fantasyland Autopias were combined into one single attraction, with updated cars and an all-new queue building, with Chevron Corporation as the sponsor.

In April of 2003, Space Mountain closed suddenly to begin work on a long-rumored complete refurbishment and rebuild of the attraction. In October, the mountain was repainted back to its original white.

For Disneyland's 50th Anniversary, Buzz Lightyear Astro Blasters opened in the former Circle-Vision 360°/Rocket Rods queue building, and an all-new Space Mountain reopened. Much of the land's brown and gold paint scheme was eliminated, with a new blue, silver, and white scheme implemented in its place, combined with some of the 1998 elements. Even the abandoned PeopleMover/Rocket Rods tracks were painted to match the rest of the land. The Astro Orbitor was one of the few remnants of the 1998 paint scheme, but was repainted with a predominantly silver finish in 2009.

In 2015, Innoventions was closed, to be replaced with both a Marvel meet-and-greet called Super Hero HQ and a walkthrough attraction called Star Wars Launch Bay. Captain EO was also closed that year, and the Magic Eye Theater no longer had any permanent attraction.

In 2019, as part of the "Project Stardust" initiative to improve the park's infrastructure, the decorative rocks that had surrounded the Astro Orbitor since 1998 were removed; they had been given the derogatory nickname "French Fry Rocks" by guests. They were replaced by planters which are much less physically and visually obtrusive, creating a new look for the land's entrance. This area was further enhanced the following year by giving the facades to either side of the entrance a new, metallic paint job, and by installing new planters in front of these facades.

Space Mountain has featured two overlays offered seasonally. From 2009 to 2018, the attraction was transformed into Space Mountain: Ghost Galaxy during Halloween season. A Star Wars-themed overlay called Hyperspace Mountain, which placed guests in the middle of an X-Wing starfighter battle, was offered during Season of the Force and now currently being offered around May 4th. 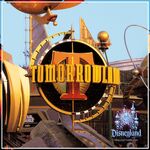 The new Tomorrowland entrance at Disneyland 2020