April 15, 1983
Tomorrowland is one of the themed lands at Tokyo Disneyland in Japan. It was designed as a loose copy of Magic Kingdom's original Tomorrowland, particularly the main entryway which features nearly identical waterfalls and blue spires flanking the walkway. As is the case with other areas of Tokyo Disneyland, Tomorrowland has fewer attractions and more open spaces than its American counterparts, a move designed to facilitate a larger number of park guests. Notably missing is a PeopleMover-type attraction, whose tracks and ride vehicles have been conspicuous features of other Tomorrowland landscapes.

Although Walt Disney intended the original Tomorrowland in California to be a "living blueprint" of the future, Tokyo Disneyland's Tomorrowland never directly showcased future technology, instead opting for more of a science fiction theme. Prominent attractions supporting this theme include Space Mountain and Star Jets, as well as the Pan Galactic Pizza Port, a restaurant that features a large audio-animatronic pizza-making machine operated by a whimsical alien creature named Tony Solaroni. In recent years, older attractions have been replaced with newer ones that feature movie tie-ins: Buzz Lightyear's Astro Blasters and Monsters, Inc. Ride & Go Seek are two examples. 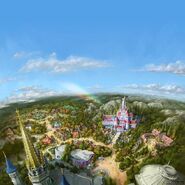