Disney Wiki
Register
Don't have an account?
Sign In
Advertisement
in: Characters, Raya and the Last Dragon characters, Disney characters,
and 11 more
English

Druun, too much spice in his congee, treachery

“I, too, wish to join this fellowship of Druun butt-kickery!”
―Tong[src]

Tong is a supporting character in Disney’s 2021 animated feature film, Raya and the Last Dragon. Described as a formidable giant, Tong was the last surviving member of Kumandra’s Spine Land, after humanity was desolated by the Druun. Among the casualties were his family, including his infant daughter. In the aftermath, Tong became the sole guardian of Spine’s Dragon Gem piece, and joined forces with Raya to save the world with the help of the last dragon, Sisu.

Underneath his huge, gruff, and fierce exterior, Tong is really a lonely woodsman with a soft spot for little ones. Equal parts severity and softness, he is truly a gentle giant.

Arriving at the Land of Spine, Raya and Sisu get caught in a sack where the two find themselves at Tong's hut to which Tong explains to the two that it has been a while that he saw someone passing by his shelter. As Sisu believes that Tong is lonely, he denies, explaining that he was born and bred to do only one thing: to conquer his fear and to face off his enemies with courage. As Raya asks Tong for help, explains to the two that it will take up two weeks to clean up just as he overthinks of his plan he is talking about only for him to be foiled by Tuk Tuk, Noi, and the three Ongis who tie him up on a post.

Upon looking at a group of Spine soldiers petrified by the Druun, Tong shares his story of his warriors battling the Druun before they were petrified just before Raya plans to stall Namaari's plan. As Raya asks him for his name, the lone warrior of Spine introduces himself as Tong to which he tells him to keep her friends safe from Namaari to which she agrees. Tong escorts the rest of Raya's companions across the forest as Raya engages in a duel against Namaari just as he and the rest of Raya's allies board the Shrimporium to escape.

On their way to Fang, Sisu devises a plan to Raya to save Kumandra, Tong manages to help Raya defeat the Druun just as he hands out another piece of the Gem which causes Sisu to feel her brother Pengu's magic just as Sisu happily gains more power with the piece found as the Shrimporium is on their way to Fang. Sisu explains that when her brothers and sisters put their faith on her, it empowered on her anything that she could have imagined as the same could also happen to Namaari as a plan to save Kumandra.

Upon arriving at Fang, Tong argues with Boun about the ingredients placed on the soup Raya's father made to which Raya tells her friends about the soup her father made for her before his petrification. Tong then explains to Raya that the baby's name is Noi to which the conversation is disrupted upon seeing a flare in the sky. The next day, Tong and the rest of Raya's friends confront Namaari before she fires her arrow at Sisu. With Sisu gone, Tong and the rest of Raya's friends react to what happened to what Namaari did to her just before the Druun arrive at Kumandra again. As the Druun continue plaguing Kumandra, Tong is petrified along with everyone at Kumandra, as the gem's magic fades away.

With all the pieces of the Dragon Gem reunited, the Druun is wiped away, just as Tong is revived alongside everyone at Kumandra. Tong returns to his kingdom, Spine and reunites with his people. Later, Tong then visits the kingdom of Heart with everyone else in rejoice. 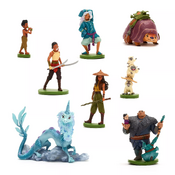 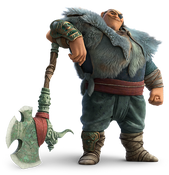