1980-present
Tony Anselmo is an American voice actor and animator, who has worked at Walt Disney Animation Studios since 1980. After Clarence Nash’s death in 1985, Anselmo succeeded him as the voice of Donald Duck, having been apprenticed by Nash for the role during the last three years of the former's life. Anselmo's first performance as Donald was on a television special titled DTV Valentine (1986) that premiered on The Disney Channel. Since then, Anselmo has voiced Donald in thousands of projects, including television, feature films, theme parks, and consumer products.

He also voiced Daisy and Huey, Dewey, and Louie (whom he would later also voice in Mickey Mouse Works, House of Mouse, and Have a Laugh!) in Down and Out with Donald Duck in 1987 and animated the Wardrobe in Beauty and the Beast.

He also supplied additional voices for the Phineas and Ferb episode "Road Trip".

In September 2009, Anselmo was officially named a Disney Legend.

He began collecting Disney objects and ephemera at an early age. Anselmo has been also known for his comprehensive collection of Disney posters relating to the works of Walt Disney. This expertise resulted in a 2002 art book, The Disney Poster Book featuring the Collection of Tony Anselmo. 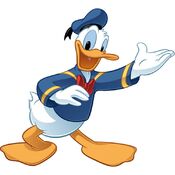 Daisy Duck
(Down and Out with Donald Duck) 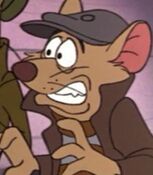 The Garbled One
(DuckTales)

Tony Anselmo with Bill Farmer at the 2010 Annie Awards.