D'Andrea and Daegal (both with Beech)
Joanna and Antonia (both with Grant)
Anthony Dominick Benedetto, better known as Tony Bennett, is an Italian-American singer of popular music, standards, show tunes, and jazz. He made a guest appearance in episode 106 of Muppets Tonight. He also appeared as himself in Muppets Most Wanted during the song "We're Doing a Sequel". Additonally, he was mentioned in The Santa Clause 3: The Escape Clause.

His song "I Left My Heart at San Francisco" was featured in Arachnophobia.

His song "The Shadow of Your Smile" was featured in Crossing the Bridge.

His song "With Plenty of Money and You" was featured in Swingers. 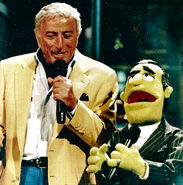 Tony Bennett with Kermit the Frog