Anna and Tess
Anthony Howard "Tony" Goldwyn is an American actor, voice actor, director, producer, screenwriter, and political activist who is best known for his roles as Carl Bruner in the 1990 fantasy thriller film Ghost, Colonel Bagley in the 2003 drama war film The Last Samurai, and President Fitzgerald Grant III on the ABC drama series Scandal.

For Disney, he voiced Tarzan in the 1999 Disney animated feature film of the same name. He also portrayed Harold Nixon in the 1995 Hollywood Pictures film, Nixon, and Dr. David Schaffer in the 2002 Touchstone drama Abandon. Additionally, he played Fitzgerald Thomas Grant III in the ABC TV series Scandal.

He is also the son of Samuel Goldwyn Jr., founder of the studio Metro-Goldwyn-Mayer. 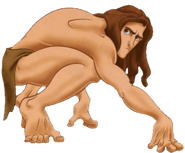 Tarzan
(Tarzan)
Add a photo to this gallery

Tony Goldwyn behind the scenes of Tarzan.

Tony Goldwyn speaks at The Divide panel at the 2014 Summer TCA Tour.

Tony Goldwyn and his wife, Jane Musky at premiere of Star Wars: The Force Awakens in December 2015.

Tony Goldwyn speaks at the Scandal panel at the 2017 Winter TCA Tour.

Retrieved from "https://disney.fandom.com/wiki/Tony_Goldwyn?oldid=4063507"
Community content is available under CC-BY-SA unless otherwise noted.