Disney Wiki
Register
Don't have an account?
Sign In
Advertisement
in: Article of the week, Characters, Disney characters,
and 16 more
English

House of Mouse
Once Upon a Time (cameo; Tony only)

Their "Butch", fine food, satisfied customers, serenading, romance
Tony and Joe are supporting characters in Disney's 1955 animated feature film Lady and the Tramp. They are a pair of Italian culinary artists that run Tony's and are longtime friends of the Tramp, whom they affectionately refer to as "Butch".

Tony (voiced by George Givot) the owner, waiter, and namesake of the restaurant. He is a lovable man with a larger-than-life personality. Like Joe, is an unabashed lover of dogs, especially the Tramp. In fact, he is one of the very few people in the town that actually sees the Tramp as his friend, rather than a mangy pest. Though generally friendly, Tony can sometimes be a little short-tempered, especially with Joe.

Tony carries a plump figure. He has black hair, but he is half bald. He also possesses both black eyes and thick matching Italian-style mustache, medium skin, thick black eyebrows, and lavender circles. He wears a teal vest, a pink long-sleeved shirt with a brief V-cut neckline, collar, and each gold cufflink on both sides of his cuffs, both black string tie and armbands, a white apron, a pair of navy pants, and a pair of brown low-heeled shoes. On their romantic evening, he plays his accordion when he sings Bella Notte to Lady and the Tramp with Joe, who plays his mandolin.

Joe (voiced by Bill Thompson) works at the restaurant as a chef. While Joe is a loyal employee and just as jolly as his boss, he can be annoyed by Tony's short temperament, being that he usually finds himself at the other end of Tony's outbursts.

Joe carries a slender figure. He has both black curly hair and eyes, medium skin, lavender circles, thick black Italian-style mustache and thick matching eyebrows. He wears a white elbow-length shirt with each couple light gray horizontal buttons vertically on his chest, a white bandanna, a light gray apron, a pair of olive pants, a pair of brown low-heeled shoes, and a white chef hat. On their romantic evening, he plays his mandolin when he sings Bella Notte to Lady and the Tramp with his boss Tony, who plays his accordion.

In Lady and the Tramp, Joe is first seen when the Tramp, or "Butch" as nicknamed by both him and Tony, stops by Tony's to get a bite of breakfast. Later on in the film, the Tramp brings his latest girlfriend Lady to the restaurant for dinner. Tony tells Joe to get the Tramp some bones. Then, when Tony sees Lady, he knocks the plate of bones off of Joe's hand in a terrible fury and orders him to cook Lady and the Tramp a fancy dinner, instead. When the Tramp tells Tony in dog language what he wants, Tony tells Joe that the Tramp has said that he would like spaghetti for dinner, to which Joe replies, "Tony, dogs don't talk." But when Tony says that the Tramp is talking to him, Joe says, "OK, he's-a talking-a to you! You the boss-a!" Joe then gives his boss the food, while muttering "Mamma Mia" in Italian. To further the romantic evening, Tony and Joe perform the song "Bella Notte" for the couple. Joe plays the mandolin while Tony plays the accordion.

Tony and Joe (voiced here by Jim Cummings and Michael Gough) are first seen early in the film, serving Jim Dear, Darling, Junior, Lady, the Tramp, and their puppies a plate of spaghetti. Scamp barks and jumps up excitedly when he sees the spaghetti, which causes Joe to lose his balance and dump the spaghetti in Tony's face. Later on in the movie, Scamp brings Angel to Tony's where Tony and Joe present them with spaghetti, just as they did with Scamp's parents in the past.

In the House of Mouse episode "Max's Embarrassing Date", Tony and Joe were booked to set up a romantic date for Max Goof and Roxanne.

Tony, portrayed by Emanuel Fappas, appears in the episode "The Apprentice", as the owner of the Italian restaurant where Emma Swan and Killian share a romantic dinner.

Tony (portrayed by F. Murray Abraham) and Joe (portrayed by Arturo Castro) appear in the 2019 Disney + live-action adaptation of the animated film.

Tony and Joe have made occasional appearances as face characters at the Magic Kingdom park at Tony's Town Square Restaurant on Main Street, U.S.A., an Italian dining location inspired by the film. Tony and Joe also appear during the bubble sequence in Disney's Hollywood Studios version of Fantasmic!.

Tony and Joe in the House of Mouse episode, "Max's Embarrassing Date"

Tony and Joe at the Disney Parks

Tony with Lady and Tramp by Joe Rinaldi 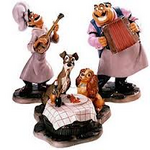