This article is about cartoon characters in general. For the Stitch! experiment, see Toons. 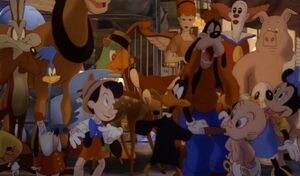 “All cartoon characters and fables must be exaggeration, caricatures. It is the very nature of fantasy and fable.”
―Walt Disney

A "Toon" (abbreviation of Cartoon) is simply an animated character or creature. In Who Framed Roger Rabbit, they are presented as sentient beings who, notably, can physically occupy space and interact outside of their animated universe and into, say, the real world. All toons, no matter the company of their creation, come from a universe in the Multiverse known as the "Tooniverse." One way to get there is through entering Toontown, an animated metropolis adjacent to Los Angeles where most toons live.

All toons were once put in danger long ago when Judge Doom (a crazy, genocidal toon disguised as a real human) planned on destroying Toontown (by using the Dip) for commercial trade and a proposed freeway. All toons were almost completely wiped out until Doom's plans were foiled by Eddie Valiant, along with Jessica and Roger Rabbit.

Almost all toons (depending on their personality) have an innate sense of comedic or dramatic timing. Most toons also have (also depending on their personality) an intense focus on a single-minded goal, such as hunting, catching prey, having selfish needs, being hungry, or capturing the object of one's romantic feelings; generally with comedic or dramatic results.

Because of their interdimensional origins, most toons possess amusing abilities that contradict laws of physics in the real world; usually disregarding the physical laws that govern the real universe when traveling inside the real world (and a reciprocal disregard of those laws for them). Toons can also accomplish feats and possess powers which were impossible for anything or anyone in the real world to imitate. All toons are also completely immune and nearly indestructible to any serious injury (e.g., being crushed, shot with bullets, decapitated, eviscerated, stabbed, suffer from blood or energy loss (that is, they can regenerate their blood or life force after it is taken from them), frozen or burned, stretched, etc.). The mechanics of the Tooniverse and their way of life are based entirely on humor; nearly anything can happen only as long as it's humorous in some way. The color of Toon blood is also a mystery.

This is especially seen in animated characters like Looney Tunes, Tom and Jerry, or the Tex Avery cartoons. However, toons use these unique abilities to entertain humans in the real world. The only way to permanently kill a Toon is to dip it in "Dip," because the chemicals that make up Dip are paint thinners (though Eddie Valiant defeated most of Doom's weasels by making them laugh to death).

Toons also never age, no matter how long their cartoons last. Many long-running theatrical shorts, television series, and comic strips often feature characters in both present day and moments of history. And in both examples, they don't appear to age. It is said that whenever certain animated characters appear to age according to time, there exist different versions of that character playing the part of that particular age, though this is not proven very clearly. Toons also don't appear to suffer from many of our world's diseases and illnesses unless the script calls for it. They can also change their height and muscular structure to adapt to any particular situation. As Goofy and Oswald the Lucky Rabbit have demonstrated (with them being in relationships and with children of their own), toons can also procreate if they so choose.

Some toons also have the ability to produce certain things to show their feelings and emotions (e.g., hearts floating over heads or eyes forming into hearts when in love, explosions in eye pupils and/or steam shooting out of ears when angry, stars or birds orbiting heads whenever dizzy and/or in a daze, etc.). Comic strips are produced by photographing toon characters that speak in word balloons, which appear above their heads whenever they talk.

If we believe the original film, with the exception of the characters appearing in or created specifically for Who Framed Roger Rabbit, all animated/cartoon characters ever created (ranging from the early 1900s to the 2000s and beyond) are Toons. However, lots of films and comics seem to contradict this idea.

The origin of the word probably was started by the name of the Looney Tunes series of animated shorts by Warner Brothers (though the spelling is different). It was first used in the 1981 Gary K. Wolf novel Who Censored Roger Rabbit? and its film adaptation Who Framed Roger Rabbit. These two works created and established the Toon Noir sub-genre, which features toons and non-toon humans living together, each playing by their own set of physics.

The small sub-genre also includes Disney's Raw Toonage, Bonkers, and House of Mouse and Warner Brothers' Tiny Toon Adventures, Animaniacs, and Freakazoid cartoon series and the films Space Jam (1996), The Adventures of Rocky and Bullwinkle (2000) and Looney Tunes: Back in Action (2003), and also the video games Toon, Go! Go! Hypergrind, Toonstruck, and the MMORPG Toontown Online. The video game Epic Mickey is supposedly set in a world resembling the world of Bonkers and the House of Mouse, but no human is seen during the game, so it can't be classified as a Toon Noir game stricto sensu.

Retrieved from "https://disney.fandom.com/wiki/Toon?oldid=3822426"
Community content is available under CC-BY-SA unless otherwise noted.