Toon Disney was a 24-hour American cable television channel owned by the Walt Disney Company that aired mostly children's animated television series. A spin-off of Disney Channel, Toon Disney showed children's cartoons 24 hours a day (except for minimal live action programming); its format had similarities to those of Cartoon Network and NickToons. Toon Disney's target audience were children ages 2–14, with the exceptions of programming used in a night time block aimed at children ages 7–14 called Jetix. A Spanish language audio track was available on Toon Disney through the SAP option; some cable and satellite systems also offered the Spanish language feed as a separate channel.

In the 2000s, Toon Disney gained a variety of new programming expanding the vast collection of Disney animation. Many programs from One Saturday Morning and ABC Kids joined the lineup, mostly without the expense of other programs. However, in 2004, with the addition of Jetix and reruns of animated programs from Disney Channel, many of the older programs on Toon Disney vanished.

On August 6, 2008, Disney-ABC Television Group announced they would re-brand Toon Disney in early 2009 as Disney XD, which would be aimed at kids from ages 6 and up. Toon Disney ceased broadcast on February 13, 2009 (two months and five days shy of eleven years since it first started broadcasting), and was re-branded as Disney XD. Toon Disney/Jetix ran a preview night starting at 7:00pm on Thursday, February 12, the day before the network launched, the preview night included more promos about the new Disney XD shows. The final program on the channel was The Incredible Hulk, as part of Jetix. The first program to air on Disney XD was Phineas and Ferb.

During the network's existence, Toon Disney aired the Disney Channel Original Movies Jett Jackson: The Movie, and Up, Up, and Away. The theatrical films Max Keeble's Big Move, Snow Dogs, and Herbie: Fully Loaded have also aired recently. Toon Disney contained more than 10 short segments includes video/slideshow format. The short series Check This Kid Out aired randomly during the commercial breaks between July 7, 2008 and February 13, 2009. On September 7, 2008, one of Disney's only live-action short films, Frankenweenie, aired on Toon Disney. The Suite Life of Zack & Cody aired on the network in late 2008, as well as the original movie Minutemen in 2009, but this was likely part of the transition to Disney XD as the announcement had already been made. 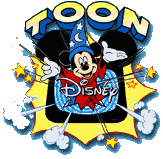 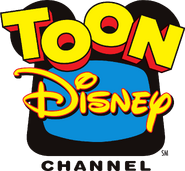 At the beginning of one episode of Teamo Supremo during the "@Toon" block, the "super secret word" showed up after the Toon Disney screen bug appears.