Lives with her owner and their newfound, adopted family at McDuck Manor in present day Duckburg (original series)
Sent back to her original time period (2017 series)
Toostie is the pet Triceratops of Bubba the Cave Duck in DuckTales. She is a baby dinosaur that behaves much like a puppy and a pony. She first appears in the episode "Marking Time" (part one of "Time is Money"). There, Scrooge McDuck, Launchpad McQuack, Huey, Dewey, and Louie travel back in time and find her and Bubba.

Tootsie made her debut in the five-part DuckTales episode "Time is Money", when the heroes accidentally go too far back in time. She and Bubba sneak onto the time machine and travel to the present day with Scrooge, Launchpad, Huey, Dewey, and Louie. After that, she made recurring appearances in the series.

Tootsie appears in the 2017 reboot episode "Timephoon!" Instead of being Bubba's pet, Tootsie comes from before Bubba's time, though he does ride her as a reference to their past relationship. She is also more savage than her original counterpart. When Louie uses Gyro's Time Tub to steal treasures from the past, the result is that multiple beings from the past are brought forth into the present in a time storm, Tootsie being one of them. She attacks both past and present characters during the storm, though Bubba is able to hold her at bay. She returns to her time period after Louie uses the Time Tub to send the beings of the past back. 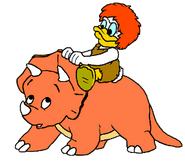 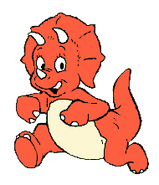 Retrieved from "https://disney.fandom.com/wiki/Tootsie_the_Triceratops?oldid=3813880"
Community content is available under CC-BY-SA unless otherwise noted.