Mei and Satsuki, his friend Catbus, being played with by Bonnie

Totoro is the titular character from Hayao Miyazaki's film My Neighbor Totoro. He is a spirit of the forest that befriends Mei and Satsuki Kusakabe. A plush version of Totoro is owned by Bonnie in Toy Story 3.

Totoro is the titular character of the Studio Ghibli film. He is a kind creature who befriended two young girls, Mei and Satsuki Kusakabe, moving into a nearby house. He lived in a forest with family and was often seen with the girls sometimes, such as standing right next to one of them in the rain with an umbrella.

Totoro is one of the toys owned by Bonnie Anderson. He first appears when Bonnie is seen playing with her toys. He is shown to sleep with Bonnie and her other toys. Woody gives him a hug when he finds Andy's house. At the end of the film, he is present when Woody introduces Bonnie's toys to Andy's toys.

In the end credits, he is seen juggling the Aliens in front of the Potato Heads. He later watches a Shakespearean play with his new friends and Bonnie's toys. He is also seen helping Buzz build a spaceship and watching him and Jessie dance. He is also shown to be stronger than the other toys, as while Buzz finds it hard to lift the cardboard spaceship, Totoro seems to have no trouble at all. 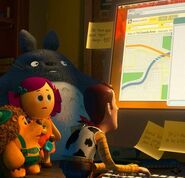