1974-present
Townsend Putnam Coleman III is an American voice actor and DJ who performed in many animated series (such as The Tick) and TV commercials beginning in the early 1980s. He also voiced Michelangelo in the 1987 animated TV adaptation of Teenage Mutant Ninja Turtles.

For Disney, he voiced The Vulture Police in the Disney animated show, Timon and Pumbaa, Canard Thunderbeak in Mighty Ducks, and various others listed below. 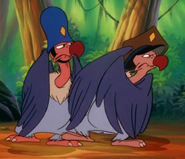 Hercules (Marvel)
(Hulk and the Agents of S.M.A.S.H.)
Add a photo to this gallery

Retrieved from "https://disney.fandom.com/wiki/Townsend_Coleman?oldid=4423666"
Community content is available under CC-BY-SA unless otherwise noted.