Toy Story was a film that went through numerous changes before finally being released on November 22, 1995. The story was originally written as far back as March 1991 by John Lasseter, Pete Docter, and Andrew Stanton. The original pitch was noticeably different, yet featured numerous plot elements and characters that would later be incorporated not just into Toy Story, but also 2, 3 and 4 as well. The outline itself was featured on a special edition DVD version of the film.[1]

The story begins with Tinny; a wind-up, one man band, tin toy; being "born" within a toy factory. He is placed within a box and shipped to a toy store to be sold. Tinny immediately wishes to be played with as it is a toy's purpose. He is eventually bought by an adult and wrapped up as a birthday present for the man's son. The son begins playing with Tinny who enjoys the attention, but an old beat up teddy bear tells Tinny to enjoy it as much as he can as the boy will eventually outgrow him:

"Enjoy it while you got it. Kids grow up and they'll outgrow you. They run off after girls, cars, whatever, and they forget all about their toys. Your best shot is to be handed down. Play your cards right, and when this boy grows up he'll hand you down to his kids. You're made of tin, so you'll last. Not like some of these plastic things. In a week they'll all be broken. But you have a chance. Like I said, enjoy it while you got it. It doesn't last forever."

Eventually, the family decides to go on a road trip and Tinny is taken by the boy. The family continues to bicker and argue during the ride and Tinny is caught in between the seat and the car door. As the family makes a pit stop, Tinny falls out of the car and the family drives away before he can get back on. Tinny is left all alone in the cold desert with no hope of returning home.

The next morning, Tinny spots a family across the street who are moving into a new house and tries to venture across without getting flattened by the traffic. He is successful and hops into the back of what he thinks is the family's truck, only to realize to his horror that he is in another truck and watches as the family drives away in the opposite direction. Tinny sadly resigns himself but ends up encountering a slightly bitter, but jokey ventriloquist dummy. The Dummy tells Tinny that he will look after him and reveals that the truck they are in belongs to a collector of old things and that they are headed to an auction.

They escape through the collector's garbage and end up getting into a garbage truck. The Dummy pulls a lever resulting in the trio hanging out of the back of the truck. They fly off and end up inside of a box at a yard sale where they are sold to a young couple for their "baby". They are taken to their new home, but "Baby" turns out to be a dog who begins terrorizing the toys. They flee under the couch where they find a squeeze toy glow-in-the-dark penguin named Binky who has been hiding from Baby for a while.

They escape out the backyard and discover that they are right next to a kindergarten school. While Caterpillar and Binky are picked up by the kids to be played with, the Dummy is dragged back by Baby, forcing Tinny to go back and save him. Binky and Caterpillar meet a See 'n Say and a Speak & Spell who learn about Baby and they go back to help Tinny rescue the Dummy. Using a series of traps and tricks, the toys eventually lead Baby into a recycling bin where he is carted away.

The toys make it back to the kindergarten, but the Dummy is all torn up. The teacher comes in early in the morning and spotting the Dummy patches him up and puts him back in the classroom to be played with. As the kids enter the room, Tinny realizes that every year new kids will come in and play with them, thus he and his friends have truly found a toy heaven and live happily ever after. 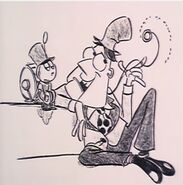 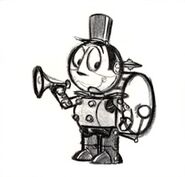