E
Toy Story is a video game for the Sega Genesis, the Super Nintendo, Game Boy and Windows 95 PCs, developed by Traveller's Tales and released by Disney Interactive. It is largely based on the movie of the same name. The game was distributed by Capcom in Japan. The game closely follows the plot of Toy Story, with a few minor differences. The game was followed by a sequel based on the second film.

The game closely follows the plot of Toy Story, with a few minor differences.

It's the day of Andy's birthday party, and his toys are riled up about the possible newcomers and their potential replacement. In an effort to calm their nerves, Sheriff Woody sends a troop of green army men, along with a baby monitor, to report. The mission goes over smoothly; however, they receive an abrupt warning that Andy is returning to his room, sending everyone in a frenzy to return to their positions. Once things have settled down and Andy has left the room, the toys find a lone newcomer: Buzz Lightyear. They are impressed with him and his features and Hamm decides that Woody and Buzz should have a race to settle their argument and Buzz wins the race, but Woody, still unfazed, challenges Buzz to fly around the room with his eyes closed, which Buzz does. Woody finds that he is being replaced by this newcomer in status, both in the eyes of the toys and of Andy, and is relegated to the toybox. He begins to have nightmares about Buzz (which never happened in the film version. But it was based on the deleted scene.) which he ends up confronting.

Jealous of all the attention Buzz has been getting, and dire to be the toy Andy brings to Pizza Planet, Woody grabs R.C. and knocks Buzz out the window. This draws the ire from all the other toys, Mr. Potato Head, Slinky, Hamm, Rocky, and Snake, who Woody escapes from (with the help of Rex, as he doesn't like confrontations). Woody is chosen as the toy to go to Pizza Planet, but first a stop to the gas station; Buzz hops in the van and gets his revenge on Woody for knocking him out the window and the two toys have a fight. Woody wins the fight against Buzz by trapping him in a spare tire. However, Andy and his mother leave, without noticing their absence.

Woody and Buzz hitch a ride on a Pizza Planet van to return to Andy. Once there, the two toys disguise themselves as litter and sneak into Pizza Planet, avoiding contact with humans. Buzz sneaks into a claw machine, mistaking it for a rocket to return to his home planet; Woody sneaks in the coin slot and works through the hazardous innards in pursuit. Woody is greeted by the aliens inside, who task him with saving some of their own, lost even deeper inside the machine. Woody is successful with the task and the aliens thank him. However, Sid Phillips, Andy's neighbor and notorious toy destroyer, has noticed Buzz in the claw machine and is trying to fetch him out; Woody is successful in delaying Buzz's capture by launching the Aliens at the claw, but is unable to prevent it, and instead goes along with him.

Woody and Buzz try frantically to escape from Sid's room, which is overrun with metal bugs and live firecrackers. Sid occasionally pops in to torture Woody by setting his head on fire, sending Woody dashing for a nearby bowl of cereal to douse it. Woody and Buzz have a run-in with Sid's collection of mutilated toys, keeping them back with Buzz's karate-chop action. However, Sid decides to destroy Buzz with a large rocket, and takes him away; to save him, Woody then befriends the toys, and riding on the back of Roller Bob, sneaks out into Sid's backyard, dodging various pieces of litter and Sid's dog, Scud.

Woody successfully saves Buzz, but the movers leave without either toy. Woody manages to catch up to the truck, but Buzz falls behind. Woody finds R.C., hops on his back on the road, and drives back for Buzz securing him they proceed to ride R.C. back to the truck. However, R.C. runs out of batteries. Buzz and Woody light the rocket on Buzz's back, cutting it off once they gain enough airspeed and glide all the way back to the van of Andy's mother. The two toys have gotten over their differences over the course of this adventure, and go on to be good friends in Andy's new house.

Players control Woody through 17 stages (18 for the Genesis version) that encompass the entire plot of the film. Several obstacles lie between the player and the goal of each level, not least of which is a wide assortment of enemies. Woody is equipped with a pullstring whip, which will temporarily "tie up" opponents, letting Woody pass by unharmed. It cannot, however, kill enemies (with the lone exception of Nightmare Buzz, the only boss in the game to be permanently defeated through the whip). This whip can also latch onto certain hooks, letting Woody swing above perilous terrain (similar to Earthworm Jim and its whip mechanics).

The game occasionally changes genres for a stage. Players control R.C. in two stages: one in which Woody knocks Buzz out a window, the other in which they both race back to the moving truck. Both play largely the same; the game takes an overhead view of the level, giving the players basic acceleration, braking and steering, and tasking players with reaching the end of the stage while not running out of batteries (which drain constantly, but can be replenished by bumping them out of Buzz in the former stage, and merely finding them on the ground in the latter). The Genesis version also has an exclusive level in which Woody rides R.C.'s back while rushing back to Sid's house to fetch Buzz; this stage plays very similar to OutRun, but has the same condition of maintaining a battery level. Lastly, one stage takes place in a first-person maze similar to Wolfenstein 3D, in which Woody must find alien squeak toys lost inside the claw machine and return them to the play area, where the rest of the alien toys reside, all within a time limit.

Items in the Game

While exploring the breathtaking levels of the game, there were also special items for Woody to obtain or help him in the game, these were as follows:

The Genesis and SNES versions of the game are largely identical, aside from the usual differences that multiplatform titles of the time had (i.e.: the Genesis had fewer colors on screen, a limit developers were able to work around with clever programming tricks, while the SNES had higher-quality sound and up to 256 colors, albeit at a lower screen resolution). However, the Genesis version has an extra level that the SNES version doesn't, "Day-Toy-Na", in which Woody rides R.C. from the moving van to Buzz in a segment very similar to Sega's Outrun (except without any additional vehicles on the road, and with the added condition that a "battery" must be picked up every so often, or the player will lose a life and start the stage over). The PC version is identical to the Genesis version, apart having a Really Inside the Claw Machine Level missing.

It was first released on November 1995 for the Sega Mega Drive/Sega Genesis, December 1995 for the Super Nintendo Entertainment System, May 1996 Game Boy and October 1996 for the PC. It was advertised in a couple Toy Story TV spots, and even got its own advertisements on the VHS's for Toy Story and The Big Green (both used the Sega Genesis versions for gameplay footage).

The game was a commercial success, and was praised for its impressive visuals, varied gameplay, and soundtrack, though many reviewers still found the game to be mediocre and uninspired, particularly the dull side-scrolling level sections featuring Woody. The game was also said by some to be too difficult, particularly for the young audience it was certainly aimed at. The Sega Genesis version in particular was met with positive reception due to the game's 3D-rendered visuals which were a rarity for the platform (though far more common, and done more effectively, among the Super NES games library by that point). However, the PC version could not run on newer computers (ex. Windows XP), leading to massive criticism from modern gamers that own the PC version.

Characters in the Game

Sega Genesis version of the game 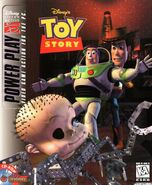 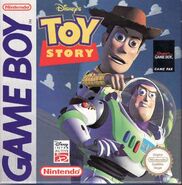 Game Boy version of the game 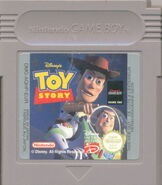 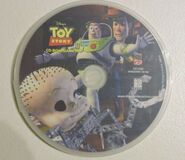