Onward
Toy Story 4 is a 2019 American computer-animated comedy film produced by Pixar Animation Studios for Walt Disney Pictures. As the fourth installment in Pixar's Toy Story series and the sequel to the 2010 film Toy Story 3, the film was directed by Josh Cooley and released in theaters on June 21, 2019.

The film continues from Toy Story 3, where Sheriff Woody and Buzz Lightyear have found new appreciation among their other toy friends after being given by Andy to Bonnie. Later in the film, the toys are introduced by Woody to Forky, a spork that has been made into a toy, and embark on a road trip adventure.

After its premiere, Toy Story 4 was theatrically released in the United States on June 21, 2019 in RealD 3D, Dolby Cinema, and IMAX. The film was critically acclaimed, with critics praising its story, humor, emotion, animation, and vocal performances.

In a flashback to nine years ago between the events of the previous three films, R.C. is being swept down a storm drain. Woody and the other toys mount a successful rescue operation, but while they are busy, a mysterious man buys Bo Peep; despite Woody's efforts to prevent the sale, Bo reassures him that it is part of being a toy to be taken away.

Two years after Andy donated his toys to Bonnie, Woody and the other toys are content in their new life. Worried that Bonnie will feel overwhelmed at her kindergarten orientation, Woody – who Bonnie has been neglecting – sneaks into her backpack, and his fears come to light as Bonnie becomes shy around her new classmates. Woody covertly places a spork and other items from a trash can on Bonnie's table during arts and crafts, and she turns them into a handmade toy-spork she names "Forky". After Bonnie places Forky in her backpack, he comes to life, which scares Woody.

Woody introduces him to the rest of Bonnie's toys, Forky experiences an existential crisis, believing that he was made to be trash and not a toy, and the other toys prevent him from throwing himself away. On a road trip with Bonnie’s family and her toys, Forky – still believing himself to be trash – jumps out of the window, prompting Woody to go after him. Woody convinces Forky of the joys of being a toy, and they journey to the RV park at a nearby town where Bonnie and her parents will be staying.

Reaching the town, Woody spots Bo's lamp at an antique store. Searching for Bo inside, he and Forky encounter a doll named Gabby Gabby and her sycophant ventriloquist puppets, the Bensons. Gabby Gabby offers to take them to Bo, but soon reveals her true colors and her plan: to obtain Woody's voice box, since her own is broken and no child will purchase her. When Bonnie and her parents enter the store, Woody and Forky try to escape, but Forky is captured by Gabby Gabby. By the time Woody escapes the shop, Bonnie's RV has left without him, and he realizes that he has left Forky behind. Woody reunites with Bo, who has become a nomad adventurer helping lost toys find owners. With Bo's companion, a diminuitive toy cop named Giggle McDimples, they take a route through a nearby carnival to rescue Forky from the antique store.

At the antique store, the toys' plan to rescue Forky fails. Woody, the only toy still determined to save Forky, has a falling out with the other toys, and indirectly insults Bo. As Bo, Duke, Giggle, Ducky, and Bunny return to the carnival, Woody gives up his voice box to Gabby Gabby in exchange for Forky. Gabby Gabby is desperate to be adopted by Margaret (the store owner)'s granddaughter, Harmony, but Harmony is creeped out by Gabby Gabby's new voice and rejects her. Buzz returns to Bonnie's RV and cries out to retrieve Bonnie's backpack, which she left at the antique store. Woody comforts Gabby Gabby, and Bo and her gang return after a change of heart.

After Bonnie returns for her backpack, the toys follow her and her parents. Through Duke's motorcycle skills, Buzz and Forky make it back to Bonnie, who is overjoyed to have Forky back. Taking Woody's advice, Gabby Gabby sees a little girl crying and gives her comfort, and is finally adopted. Ducky, Bunny, Giggle, and Duke Caboom say goodbye to Woody and leave. As Woody and Bo say goodbye, Woody becomes hesitant in returning with Bonnie. With some encouragement from Buzz, Woody decides to stay with Bo and help lost toys find owners. Buzz and the gang give Woody and Bo a goodbye hug and the two groups go their separate ways. The RV's engine starts and the toys head into Bonnie's RV, while Bonnie's parents start the engine and head home. Rex asks if Woody will be a lost toy, and Buzz says that he will never be one. Buzz and Woody share one last message to each other from afar, "To infinity...and beyond." Woody and Bo Peep spend their night of living together by looking at the nice carnival view together and the night sky.

Lee Unkrich has said in many interviews that Pixar currently does not have any plans to make a Toy Story 4, and that the purpose of Toy Story 3 was to bring the story of the toys and their relationship with Andy to a phenomenal end. He thinks it's great that people want to see another Toy Story film, but Pixar will for now focus on other stories. He has said however that Pixar will try to find various ways to keep the characters alive, as seen in the Toy Story Toons series and Toy Story of Terror! and Toy Story That Time Forgot that there may be a Toy Story 4 in the future, but they don't have any plans for it right now. In July 2010, Tim Allen has signed on to reprise his role for a fourth feature-length film, but this does not necessarily mean that a Toy Story 4 is in development. It can easily be just in case they ever thought of a good idea for a fourth film that they would have the voice of Buzz on board. It does show, however, that Disney and Pixar were toying with the idea of another Toy Story film. Tom Hanks who was supposed to turn 62 when Toy Story 4 was released had also signed on to reprise his role in case the film was made. In June 2011, Tom Hanks said in an interview that "I think they're working on it right now." However, John Lasseter says, "We haven't announced anything, so I can't really talk about it." In February 2013, several sites reported that a Toy Story 4 was in production with a release date in 2015. Some sites claimed that Disney and Pixar had confirmed Toy Story 4, but Disney has since denied these rumors saying "Nothing is official". In the most recent Muppet movie, Muppets Most Wanted, Gonzo mentions (during the "We're Doing a Sequel" number) that Disney is waiting for Tom Hanks to be available so they can make a Toy Story 4.

Despite Don Rickles passing in 2017, it has been officially confirmed that he will reprise his role as Mr. Potato Head using pieces of dialogue that Rickles had previously recorded as in the movie, provided that his estate gave permission for the film to do so.

On review aggregator Rotten Tomatoes, the film holds an approval rating of 98% based on 384 reviews, with an average rating of 8.37/10. The website's critical consensus reads, "Heartwarming, funny, and beautifully animated, Toy Story 4 manages the unlikely feat of extending – and perhaps concluding – a practically perfect animated saga."

In addition to the tracks included in the soundtrack album, the official release also includes "I Can't Let You Throw Yourself Away" by Randy Newman, "The Ballad of the Lonesome Cowboy" by Chris Stapleton, and Newman's original version of "You've Got a Friend in Me". 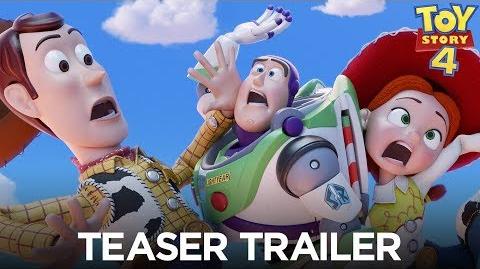 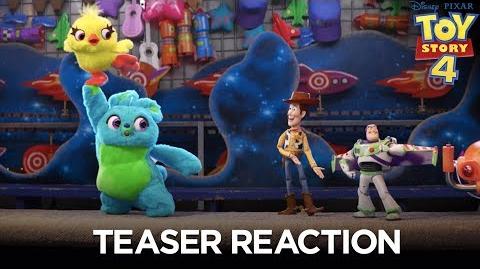 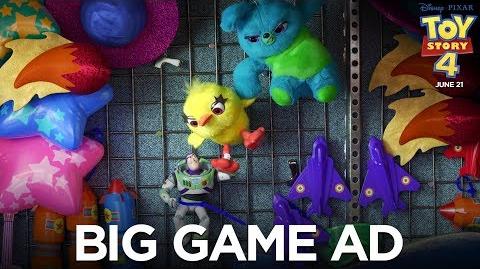 Retrieved from "https://disney.fandom.com/wiki/Toy_Story_4?oldid=3704193"
Community content is available under CC-BY-SA unless otherwise noted.