In Disneyland Park (Paris), there was a train-like parade in every seasonal event between 2007 and 2016.

The float was originally used as the Dumbo unit, Casey Junior, from its former daytime parade The Wonderful World of Disney Parade since 1998. The float consists of five separate, articulated sections forming Casey Jr's train, with Dumbo perched on the roof of the driver's cab. Since no actual characters from the film could be featured, a large group of clowns in bright yellow raincoats travelled with the float. This lack of any real characters accompanying the float was likely its downfall though. By the time the parade returned in 2001 this float simply served to close the parade. The float was lost with the May 2003 relaunch of the parade as "The Princess Parade", only to reappear again in January 2004 to provide a much-needed eighth float. It was finally retired in mid-July 2006, when the parade was rebranded as the Disney Princess Parade.

After The Wonderful World of Disney Parade closed in early 2007, the float was remodeled and repainted to form the train in various mini-parades, starting with the 15th anniversary "Disney Characters' Express". Since then, the train has had lots of re-designs and re-themes.[1]

In December 31, 2016, the float was also used in Mickey's New Year's Eve Parade at Walt Disney Studios Park after the spring event.

The original Dumbo unit from The Wonderful World of Disney Parade 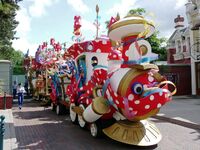 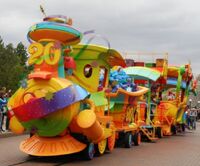